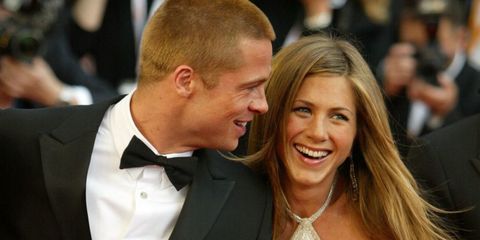 In testament to the fact exes always come back (even after 10 years), newly single Brad Pitt is now texting his first ex-wife Jennifer Aniston, a source close to Aniston tells Us Weekly. Pitt and his second wife Angelina Jolie, the woman widely seen as the reason Pitt ended things with Aniston in 2005, announced their divorce in September.

Pitt didn't have Aniston's cell number but apparently tracked it down through a "tangled web" of contacts. He reached out with a happy birthday text to her on February 11, and they reportedly started talking after. "Brad has confided in Jen," the source said. "Brad told her he's having a hard time with his split and they exchanged a few texts reminiscing about the past." 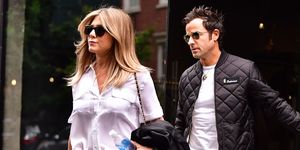 Aniston and Pitt were married for five years in a fairytale-like wedding. Their divorce was highly covered—and launched a Team Jen vs. Team Angelina narrative that lasted throughout the Brangelina marriage.

Aniston has since moved on and is remarried to Justin Theroux. Theroux himself isn't concerned about Pitt's texting either. He's "okay with them being friends," the source told Us. "[He knows] Jen just wants to be nice." Also pretty nice for a guy who once posted an Instagram that said "f*ck Brad Pitt."

Alyssa Bailey News and Strategy Editor Alyssa Bailey is the news and strategy editor at ELLE.com, where she oversees coverage of celebrities and royals (particularly Meghan Markle and Kate Middleton).
This content is created and maintained by a third party, and imported onto this page to help users provide their email addresses. You may be able to find more information about this and similar content at piano.io
Advertisement - Continue Reading Below
More From Celebrity
Meghan Markle Might Not Ever Go Back to the UK
Are Angelina Jolie and The Weeknd Dating?
Advertisement - Continue Reading Below
Kate and Will Ate Burgers With Their Kids
Meghan Markle's Handbag Was a Nod to Diana
Ben Affleck and Jennifer Lopez Made Out in NYC
Lady Gaga Stunned in an Old Hollywood Look
Olivia Rodrigo Looked Jaw-Droppingly Beautiful
Will's "Alleged Bullying" Drove the Sussexes Out
Sam Asghari Opens Up About Britney Documentaries
Prince Harry’s Memoir Is Concerning Royal Insiders