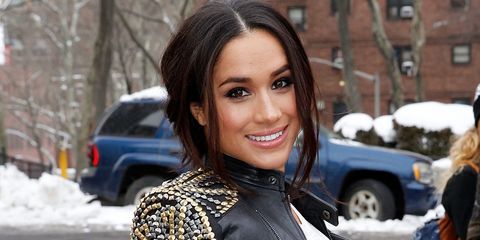 While our eyes have been glued to the television this week watching the likes of Venus Williams, Rodger Federer, and Johanna Konta serve up a storm at Wimbledon 2017, we must admit, we've spent the majority of our time scanning the crowds to celebrity-spot.

So far, the Duchess of Cambridge, Andy Murray's wife Kim Sears, and Pippa Middleton have been giving us some serious summer wardrobe inspiration during the tournament's first week.

However, if there's one A-list star we're desperate to lay eyes on, it's Meghan Markle.

But, despite her love of the tennis championship (she was spotted attending Wimbledon on several occasions last year), the Suits star appears to have shunned the tennis lawn in favor of a flight back to her home in Toronto.

According to E! Online, the 35-year-old actress was spotted arriving at her home yesterday, after spending 10 days in London with her boyfriend.

Meanwhile, her 32-year-old royal beau spent the day visiting children and players at Headingley Carnegie Stadium in Leeds as part of his new role as patron of the Rugby Football League.

Of course, knowing Prince Harry and Meghan Markle's track record of flying across the world for days at a time to see one another, the Californian beauty might pop back to Blighty to catch the Wimbledon final (fingers crossed with her royal beau in tow), so we'll be watching Wimbledon like a hawk from now until next Sunday just in case she makes a surprise appearance.