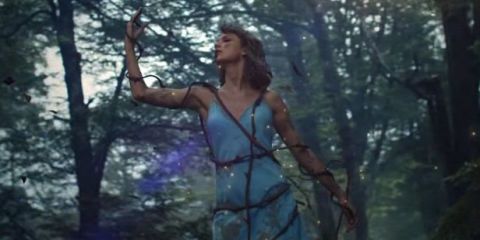 While you'd think Taylor Swift might have employed someone else to do her dirty work (quite literally dirty work―do you see all that mud?) in the "Out of the Woods" music video, director Joseph Kahn confirms the pop star decided to do it all herself. In fact, he says, she "suffered for her art."

Meaning no stunt doubles. No camera manipulation. Not even CGI-created snow. Just T-Swift really running through icy terrain in nothing but a tiny blue dress and actually crawling through the mud. As Kahn says, she "just gangstered it." He sent out a string of tweets on New Year's Day, sharing every detail you'd ever want to know about the making of "OOTW."

"One of the things that's really interesting about working with [Swift] is that she'll watch the edit with me as I shoot (because I edit as I shoot)," Kahn told BreatheHeavy of working with Swift a few months back. "She'll see how I place an edit into the shot, and I can see her brain ticking, and seeing the pieces come together the same way I do...That's very rare."

Watch "Out of the Woods" again below: