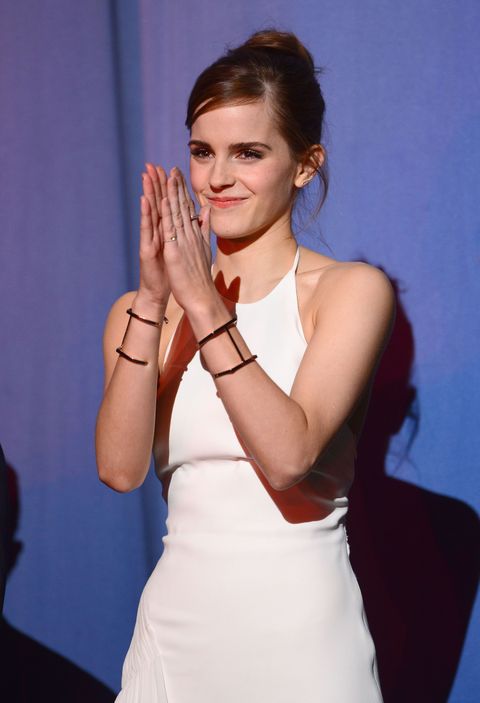 You know that "you have as many hours in a day as Beyoncé" quote-stagram that made the rounds a while ago? Well, replace "hours in a day" with "characters in a tweet" and "Beyoncé" with "Emma Watson," and you've got exactly how we feel about this epically motivational Q&A session.

Fresh off the heels of her powerful speech on the next phase of the gender equality movement #HeforShe, the newly minted Disney princess responded to Twitter users' questions about everything from confronting sexism in everyday life to public speaking. (Spoiler: Even Emma Watson gets nervous.)

Here's what we're having tattooed on our hands tonight:

Emma Watson doesn't buy the whole "but I don't want to pay for my own dinner" excuse:

@ohgryffindor I don't know its confusing isn't it!

@TheWyfeOfBathe Why not have both?

Chelsea Peng I'm Chelsea Peng, the assistant editor at MarieClaire.com.
This content is created and maintained by a third party, and imported onto this page to help users provide their email addresses. You may be able to find more information about this and similar content at piano.io
Advertisement - Continue Reading Below
More From Celebrity
The Queen Is Still Prince Harry's Mentor
Doug Emhoff Reacts to Kamala Harris's Googling Him
Advertisement - Continue Reading Below
Harry Was Homesick for a While, But Is Happy Now
Chrissy Teigen's Therapist Inspired Her New Hobby
J.Lo Claps Back After Botox Comments
Katie Just Posed in a Shirt Her Boyfriend Designed
Meghan Wasn't Appreciated for Royal Contributions
Harry & Meghan Have Had a Painful Year Since Exit
The Queen's Hot Grandnephew Is a Thirst Trap
Watch Diana Play Impromptu Piano in Rare Clip