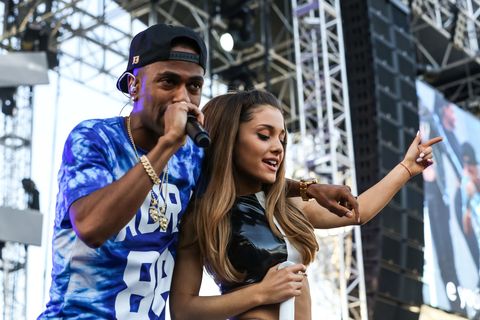 Today, the music world loses a young power couple...though she is just 21, so it's not like anyone's *terribly* surprised. But yes, according to Us Weekly, Ariana Grande and Big Sean have called it quits after eight months in a relationship.

"They both deeply care for each other and remain close friends," their reps told Us Weekly in a joint statement. "We kindly ask that the media respect their wish for privacy regarding this personal matter at this time."

Apparently, the couple called it off a couple of weeks ago, after conflicting tour schedules caused problems. So we guess that means this not-particularly tasteful "I give her that D" joke wasn't about Grande after all...

Well anyway. Maybe her next album will be packed with great breakup ballads?

We Asked Ariana Grande About ALL of Her Firsts

Man Gets Last Laugh on Cheating Ex on Twitter