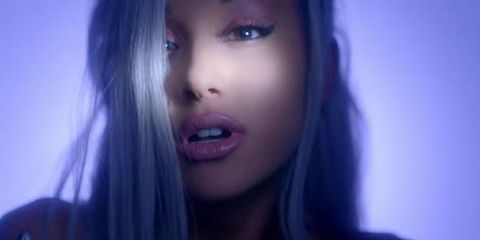 Ariana Grande just dropped the music video for her new single, "Focus," and it a) has strong early aughts vibes, and b) basically consists of her perching in a tunnel/dancing with a gaggle of girlfriends. We're into it.

"Focus" is among Grande's most catchy songs, delivering a hook reminiscent of 2001-era Destiny's Child, and seems appropriate for both the club and sad nights alone when you've already memorized all the dance moves to "Single Ladies."

Of course, the highlight of the video is Grande's new hair. Don't panic: She's still wearing a half-ponytail—it's just platinum, which goes nicely with her glow-in-the-dark onesie.

It should also be noted that like Adele, Grande spends a lot of time on the phone in this music video. Though, that thing Adele's holding in "Hello" hardly counts as a real phone, so actually nevermind.

Watch the full video below, and please remember to focus.