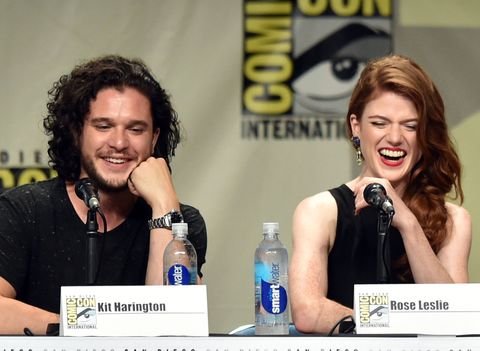 Remember when Ygritte died in Jon Snow's arms on Game of Thrones, and you were just like "WHAT IS THE POINT OF LOVE, EVEN?" And then Jon Snow was stabbed by all his friends, causing you to morph into the physical embodiment of this Gif:

Well, good news: Jon and Ygritte have taken their love to Gap, which we believe lies North of the Wall.

Fueling rumors that first cropped up way back in the days of yore (aka 2012), Kit Harington and Rose Leslie were spotted shopping in L.A., where they were photographed holding hands and kissing.

The former co-stars haven't acknowledged their relationship, but unless they're taking method acting to the extreme, there definitely seems to be a "more than friends" situation happening here. Either way, on a happiness scale of 1-10, these photos have us right about here: