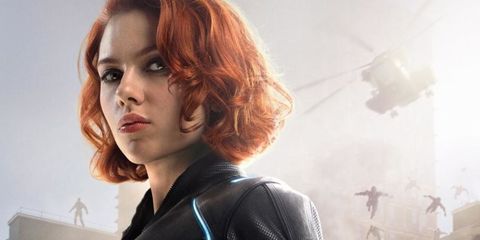 An ongoing criticism of the Marvel universe is that its female superheroes are used mostly as tokens to support the triumphs of their more recognizable male counterparts. In the case of the Avengers, Scarlett Johansson's Black Widow plays a peripheral role to the Hulk, Iron Man, Captain America, and Thor, all of which also have their own movies. How has Marvel not realized that ScarJo is the single most badass action star we have today?

With Johansson hosting the season's third-to-last episode the day after Avengers: Age of Ultron hit theaters, SNL imagined what it would be like if Marvel did indeed give Black Widow a starring role in her own movie. The result is hilarious but also a biting commentary on what most studios seem to think a woman's time in the spotlight needs to look like.

Chris Evans and Jeremy Renner Have Apologized for Their "Slut" Jokes

Quiz Time: Which Female Superhero Are You?