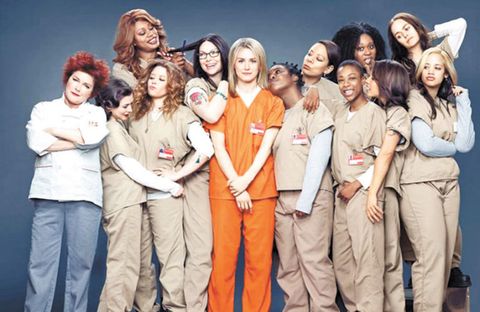 However glorious it may seem that we can transport ourselves between Piper Chapman's cell at Litchfield Penitentiary and Serena van der Woodsen's glamorous NYC digs with just a couple clicks, the convenience of stacking up our TV queues has certainly resulted in the dedication of days—weeks, even—to more series than we'd probably like to admit.

While we may never be able to kick the habit of having a "cozy night in" (a.k.a. curling up in bed with our laptop until we've finished all 13 episodes of Unbreakable Kimmy Schmidt), there's comfort in knowing a new study exists explaining how—specifically, when—the addictions to our favorite shows began.

Thanks to research from Netflix, we can trace back our binge-watching to one episode in particular—the episode that apparently hooked us in for good. Interestingly, the company found that 70 percent of viewers who made it to the "hooked episode" couldn't resist completing the rest of the season...or perhaps five more over the course of one weekend. (Hey, we've all been there.)

Take a look at the stats below to get a better idea of when your obsession first started:

How I Met Your Mother, Episode 8

Once Upon a Time, Episode 6

Orange Is the New Black, Episode 3