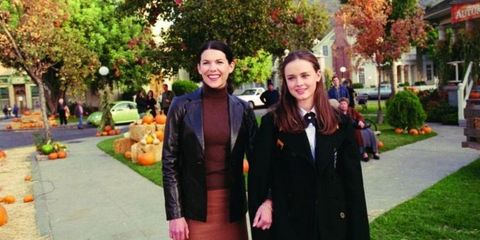 Back in October, everyone went nuts when reports surfaced that Netflix had closed a deal with Warner Bros. that would bring four brand-new, 90-minute episodes of the beloved show back to our screens. Unfortunately, neither Netflix nor Warner Bros. has confirmed that the show is actually happening, leaving it as a rumor that burns deep within our hearts.

Now, photos on social media that appear to show work being done on the Star Hollows set provide us with some actual proof that our favorite series is making a comeback. The images, posted by Twitter user Clara, seem to show Miss Patty's studio all spruced up with a fresh coat of paint and holding signs around key areas like Mrs. Kim's Antique Shop. The most exciting part is the date: January 11th, 2016. That means the show is either about to start filming or already being filmed!

Now, of course, it's difficult to determine the legitimacy of these images because they're not official photos and it's the Internet. But assuming they *are* real, it means the show is definitely on and taking place in Stars Hollow and not some other godforsaken part of the world.