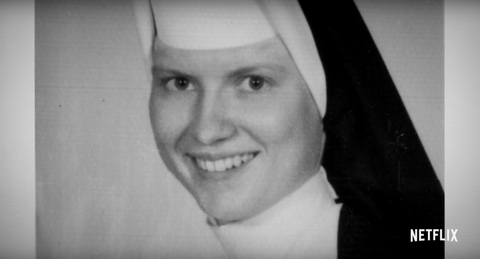 Following the success of Making a Murderer and Amanda Knox, Netflix has released yet another chilling, true crime docu-series—and based on the newly released first trailer, the show looks like it will be equal parts heartbreaking and horrifying.

Focused on the unsolved murder of Sister Cathy Cesnik, The Keepers tells a dark and multilayered story about "a beloved Catholic schoolteacher" who mysteriously went missing in 1969 and whose body was discovered months later. In the trailer, several people who knew and loved Sister Cathy offer a few theories surrounding her death and make it clear they're dedicated to discovering what happened to her. A press release for The Keepers adds that the seven-part series will explore many of these theories in great detail, with hopes of going beyond them.

"Through conversations with dozens of friends, relatives, journalists, government officials, and Baltimore citizens determined to uncover the truth, [director Ryan] White pieces together a story that goes beyond the death of a beloved Catholic schoolteacher, to encompass clergy abuse, repressed memories and government and religious institutions that he says 'at best, dropped the ball over the last 45 years—and, at worst, covered it up,'" a press release for the show reads.

The Keepers hits Netflix on May 17.