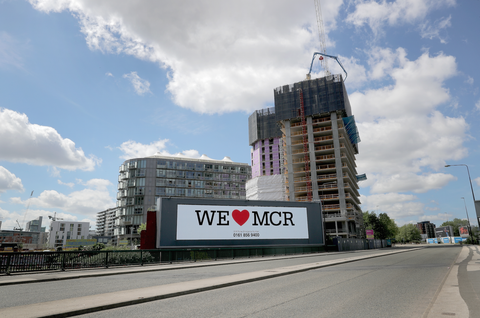 After an attack that left 22 dead and 50 injured at an Ariana Grande concert, Manchester residents came together in a show of unity that rivals any hate. Food and drinks were offered to emergency responders, beds and homes offered up to those who needed somewhere to stay, and taxi rides given for free to those just trying to get home.

Jessica Goodwin, who owns and operates a sandwich shop near the ambulance station, offered up free food and drink to those responding and helping:

"I know all their faces, and I know they must've been up all night, and I know they would've normally come into my shop," she told BuzzFeed News. "I want people to spread the word and let them know that they can stop in and have a brew, or even take it away. Hopefully my message will get through to the people who have not had a brew or a break all night."

Other similar acts began to roll in, including this rabbi who offered coffee to those at the scene:

Rabbi bringing tea for police at the cordon. "We are Manchester. We are together" pic.twitter.com/Rca7TsJXqb

"Every race, every religion, every colour, we stand together for kindness and goodness and denounce this terrible act," he told BuzzFeed.

And a phone store chain offering charging for phones:

If anyone in Manchester is looking for a loved one and needs to charge their phone, or use a phone, please use any EE store you find.

And taxis just tried to get people home:

The acts of humanity. Taxi drivers taking the injured to hospital & visitors to safety in the city after terrorist attack #ManchesterArena pic.twitter.com/5M5IMqILuB

Lastly, the hashtag #RoomforManchester let people know where they could stay if they needed—both hotels and residents opened up their homes and beds to those who needed somewhere to sleep.

Huge thanks to Ainscow hotel in Manchester for looking after my sister / 10 year old niece and her best friend. 🙌🏻 #Manchester pic.twitter.com/8Ul9XQQNLF

Our faith in humanity might not be at an all time high, but this sure helps to restore it. Our thoughts are with all those who are suffering.