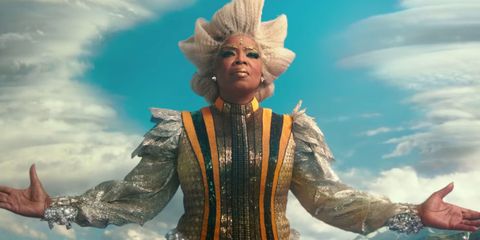 Ava DuVernay's upcoming adaptation of A Wrinkle in Time is generating a lot of interest, and with a cast that includes Chris Pine, Oprah Winfrey, Reese Witherspoon, and Mindy Kaling, it's easy to see why. And now that the official teaser trailer is here, we finally have a glimpse of the magical world DuVernay has been creating.

Based on the 1963 novel by Madeleine L'Engle, Disney's A Wrinkle in Time follows Meg Murry as she travels through time and space to rescue her scientist father from a planet where he's being held hostage. DuVernay's impeccable direction is showcased in the new trailer, and the director clearly has an extravagant and exciting vision to bring to the new adaptation.

In August 2016, The LA Times reported that DuVernay is already breaking records with A Wrinkle in Time, for being the first woman of color to direct a movie with a budget over $100 million dollars. Following the success of the female-led Wonder Woman, Disney's A Wrinkle in Time is further proof that women can, and should, direct epic action, and science-fiction, movies with strong budgets.

The universe is open wide. For all of us. The teaser for #WrinkleInTime is here! Thanks to @Disney for this moment! pic.twitter.com/5KW3bS7RLO

Due for release in 2018, A Wrinkle in Time is already generating a lot of interest. Basically, the world can't wait for this film to come out, and the trailer has only made everyone anticipate its release even more.