The men and women, none of whom had ever left their home country, flew to the U.K. from Bangladesh to take part in the Survivors Runway show launched by the charity ActionAid. The show was intended to put a spotlight on the brutality of acid attacks and violence against women and girls, and to build on the work being done by charities like ActionAid to end such horrors. 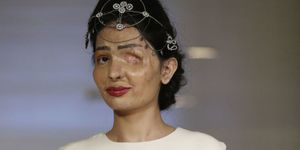 The survivors' stories are harrowing. One of the models was attacked with acid as a baby, along with her mother and father, after a land dispute involving her family.

Another woman, Jasmen, 30, was attacked at age 16 by an older, male family friend who apparently believed that, because she would be more vulnerable after the attack, her family would be more likely to approve of him marrying her.

Another woman, 35-year-old Nurun Nahar, had acid thrown over her in 1995 by her ex-husband when she refused to go home with his new wife. She had to walk nearly a mile for treatment and was hospitalized for two months. Though her ex-husband threatened she would never re-marry, she did and today is a mother.

Supported by the male survivors, the women—nervously, at first—walked down the runway wearing vibrant colors in outfits created by designer and former model Bibi Russell.

Soon enough, the music turned up and even the audience danced down the runway.

"I like to break the social stigma that's attached to acid survivors," Nurun Nahar said. There is inner beauty too. Your face or body may be burnt but not your mind. You can still carry on and do what you want in life.

"I want to set an example of moving forward with good thinking and ask others to recognize what we are doing and not feel sorry for us."