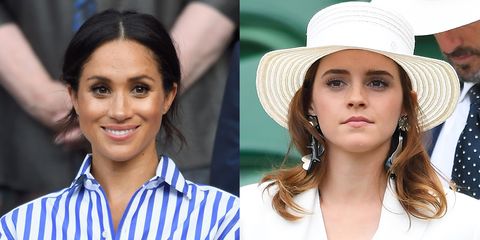 Meghan Markle is at Wimbledon today, attending the Ladies' Singles Finals with her sister-in-law, Kate Middleton. The newlywed chose a stunning blue and white striped Ralph Lauren shirt and white culottes for her first Wimbledon as a member of the royal family.

Meghan's Wimbledon style is perfection, of course. Thanks to the Meghan Markle effect, we expect everything she is wearing to sell out immediately and for copycat looks to pop up quickly. What we did not expect was for someone to show up on the same day wearing a very similar look.

But Emma Watson did exactly that.