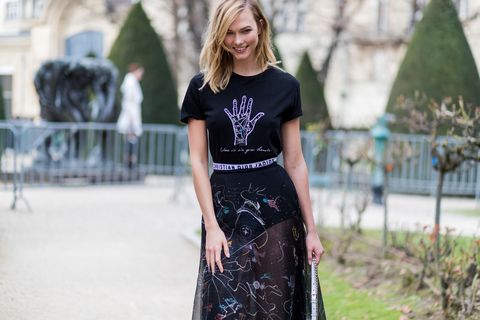 Walk into any given photo shoot these days, and you might hear a model over in one corner comparing her horoscope traits with her boyfriend's. In another corner, there's a stylist showing off pics of her Pinterest-worthy apartment filled with succulents and crystals. Nearby, a fashion editor is raving over the Moon Dust she finally splurged on at the Goop convention. And finally, there's a fashion assistant sorting rows of Prada's talisman necklaces, while another steams an elaborate Alexander McQueen gown that conjures up visions of medieval pagan goddesses.

As I fly to Dubai later tonight, a few of my favorite crystals will be here charging with the bright & full "pink moon" 💕🌚💙🕊🦋 Love love love 💫✨🌙

In many ways, this emerging spiritual conversation is an extension of the wellness revolution. "Lifestyle gurus" like Gwyneth Paltrow and Amanda Chantal Bacon, the respective CEOs of Goop and Moon Juice, have turned radical self-care—fused with a healthy interest in the supernatural—into lucrative business models.

People are searching to connect with something larger than themselves. For a generation that has largely turned away from organized religion, nurturing a spiritual self inquiry rooted in self improvement gives them something to believe in—and to buy into, whether it's a pretty piece of tourmaline or a $60 bottle of detoxifying herbal supplements.

The fashion industry has enjoyed a long-and-torrid romance with the occult. Christian Dior was famously rumored to have his tarot cards read before every show. Fast forward to Maria Grazia Chiuri's past few collections for Dior featuring all kinds of celestial and zodiac symbolism. Chiuri cited Georgia O'Keefe and Vicki Noble (a shamanic healer and creator of the Motherpeace feminist tarot deck) as inspirations for her latest Resort lineup presented in a canyon in Calabasas, California.

A look from Dior's Resort 2018 collection

Dior is just one of the many recent examples of fashion's obsession with the mystical world. Riccardo Tisci's final Spring '17 collection for Givenchy boasted giant agate pendants and geode printed dresses. That same season, Preen by Thornton Bregazzi sent out multiple looks with spellbinding pentagrams. All-seeing third eye motifs have popped up on runways including Prada, Tome, Kenzo, and more. Alessandro Michele collaborates with tarot-obsessed illustrator Jayde Fish on murals and prints for Gucci. The references go on.

And it's not just designers who are into this New Age-y stuff. Ask a digital fashion editor about their horoscopes section and she'll admit it's a consistent top-performer. So why do fashion followers vibrate on this magical frequency more so than the rest?

"At its core, the fashion industry is about investigating identity and how we project ourselves into this world. In astrology, the twelve different astrological symbols are representative of twelve different human archetypes. People who are interested in fashion and people who are interested in astrology are committed to investigating all those different parts of what it means to be a human," says Ruby Warrington, a former fashion writer who shifted gears several years ago to launch The Numinous, an online lifestyle magazine dedicated to the cosmic universe. Her debut book, Material Girl, Mystical World, is a terrific introduction to tarot, astrology, crystals, psychic mediums, and the "Now Age wellness scene." One chapter is aptly titled "Healing is the new nightlife," which pretty much says it all.

So what's Warrington's take on the commodification of all these tools and philosophies and traditions? "There are many people who may criticize this as spiritual materialism, but that bypasses the actual inner work where the real spiritual development happens," she says. "And balance for me is being able to appreciate both the external material stuff and the internal mystical stuff."

The Evolution of Maternity Style
The Coolest New Kicks for the New Season
What to Buy From Nike's Activewear Sale Right Now
Stylish and Comfy Slip-On Sneakers
Kate Middleton’s New Fave Dress Brand Is on Sale
The Best Denim Skirts for Work and the Weekend
Meena Harris Wears a Phenomenal Tee to WFH, Obvi