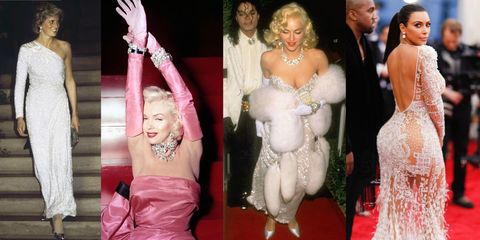 Diamonds are forever. They're also a girl's best friend―with crystals being a close second. We love all things sparkly, and were dazzled by all the flashy looks on the latest runways including the Swarovski encrusted Saint Laurent boots Rihanna quickly added to her closet. As a nod to National Splurge Day on Sunday, we've rounded up 50 of the best-and-blingiest fashion moments―from Marilyn Monroe and Audrey Hepburn to Paris Hilton, Beyonce, Kendall Jenner, and more.

Pretty in pink while singing "Diamonds Are a Girl's Best Friend," in the 1953 film Gentlemen Prefer Blondes

"The King" performing in one of his signature, bejeweled costumes

Renowned for her impressive jewelry collection, La Liz wore a crystal beaded dress and statement earrings for a dinner with then-husband Eddie Fisher in 1959

The Swedish actress posing with Cartier baubles like grapes, in the 1960s

In a rhinestone jacket and matching "Butterfly" jacket circa 1975

The late, beloved Princess of Wales wore a crystal beaded gown by Japanese designer Hachi to a Washington D.C. gala in 1985

Proving sparkles are not just for women, legendary pianist Liberace is best remembered for his flashy costumes

Twinkling onstage during a performance in 1987

Sparkling in Harry Winston jewels and a bedazzled gown, with Michael Jackson, at the 1991 Academy Awards

The supermodel donned a scarlet halter neck gown embellished with crystals, in 1993

Sparkling at the Batman Forever premiere in 1995

Courtesy of Swarovski
23 of 50
Alexander McQueen

In 1999, the designer hosted a "Diamonds Are Forever" show with De Beers in London

Performing at the 2000 MTV Video Music Awards in a sheer, nude costume accented with crystals

The original socialite celebrated her 21st birthday in 2002 wearing a crystal Julien Macdonald dress; Kendall Jenner imitated Hilton's look for her own 21st birthday this year

This content is created and maintained by a third party, and imported onto this page to help users provide their email addresses. You may be able to find more information about this and similar content at piano.io
More From Fashion
Is There Any Outfit Zendaya Can't Pull Off?
The Best Loose Pants (That Aren't Sweats)
Advertisement - Continue Reading Below
Nordstrom Wins Best Cyber Monday Sale of 2020
Savage X's December Collection Is Ice Cold
This Tech Exec's WFH Outfits Go Beyond the Hoodie
Failsafe Gift Ideas for Everyone on Your List
Snag Some Adorable/Sexy New Lingerie (You Pick!)
Le Specs Are Up to 70 Percent Off for Black Friday
The Bright Red Sweater That's Actually a Neutral
Prepare Yourself for Everlane's Black Friday Sale