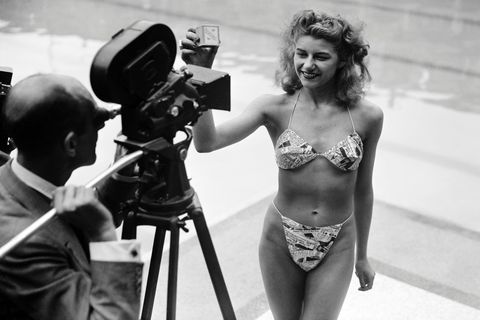 National Bikini Day took place in early July, and in celebration it's time to revisit the world's very first bikini—designed by Louis Réard and brought into our lives in 1946. Memories!

The French designer revealed his creation (made with fabric that looks like newspapers) at Paris' Molitor pool, and naturally it was completely scandalous. In fact, Réard had such a rough time getting a model for his gasp-inducing design, that he ended up hiring 19-year-old nude dancer Micheline Bernardini to show it off. In the below photo, you can see that she's holding the bikini's conveniently labeled box.

Also, fun fact: Réard is said to have named the bikini after Bikini Atoll, an atoll in the Marshall Islands where the atomic bomb was tested.

This content is created and maintained by a third party, and imported onto this page to help users provide their email addresses. You may be able to find more information about this and similar content at piano.io
Advertisement - Continue Reading Below
More From Fashion
Hats That Will Make a Statement—In a Good Way
The Most Exciting Jewelry Trends for Fall 2021
Advertisement - Continue Reading Below
Maxi Dresses That Work for Every Occassion
The 100 Best Shopping Sites to Browse Through
The Perfect Vests for Layering
How to Make White Sneakers Look Brand New
Colors of Fall You're About to See Everywhere
Madewell Is Selling Their Old Jeans on ThredUP
Jean Jackets You'll Live In
Wide-Leg Jeans Are About to Be Your Favorite Denim