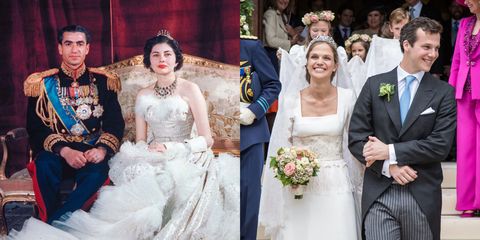 From Grace Kelly to Kate Middleton, a look back at the evolution of royal bridal looks.

The Russian fashion designer married the German prince in a bespoke Sandra Mansour masterpiece. His father reportedly objected to the union, but maybe he came around after seeing the beaded, puff-sleeve gown?

Wearing a bespoke gown by Luisa Beccaria, the actress married the Bavarian prince in a civil ceremony at her father's estate in July 2016.

In June 2016, the Belgian princess said "I do" to her longtime boyfriend in a vintage-inspired dress by Belgian designer Gérald Wathelet.

With nearly 1,000 guests in attendance, the maharaja of Mysore, India, married his childhood friend in late June 2016.

In May 2016, the daughter of the Duke of Wellington Charles Wellesley tied the knot with her financier fiancé (say that five times fast) in Íllora, Spain. The bride wore Emilia Wickstead.

7 of 28
Prince Carl Philip and Princess Sofia of Sweden

Prince Carl Philip and Princess Sofia of Sweden were married in 2015 at the Royal Palace Chapel in Stockholm.

8 of 28
Princess Madeleine and Christopher O'Neill of Sweden

Princess Madeleine and Christopher O'Neill's wedding ceremony was held at the Royal Palace Chapel in Stockholm in 2013.

9 of 28
Princess Charlene and Prince Albert II of Monaco

Princess Charlene and Prince Albert II of Monaco were married in 2011, the princess' wedding dress designed by Armani.

10 of 28
Prince William and Duchess of Cambridge Kate Middleton

The Duke and Duchess of Cambridge were married at Westminister Abbey in 2011, the Duchess wearing an Alexander McQueen wedding dress.

11 of 28
Princess Victoria and Prince Daniel of Sweden

Crown Princess Victoria of Sweden, in a Par Engsheden design, and Prince Daniel at their wedding ceremony in Stockholm, July 2010.

12 of 28
Prince Joachim and Princess Marie of Denmark

Marie Cavallier wore an Arasa Morelli design for her wedding to Prince Joachim of Denmark in 2008.

Dutch Prince Johan Friso and his bride Mabel Wisse Smit at their 2004 wedding.

14 of 28
Mary Donaldson of Denmark

Princess Mary of Denmark paired her gown with a century-old crown at her May 2004 wedding to Crown Prince Frederik.

15 of 28
King Felipe and Queen Letizia Ortiz of Spain

Prince Felipe of Spain and Princess Letizia tied the knot, complete with sword salute, in May 2004.

16 of 28
Princess Martha-Louise and Ari Behn of Norway

17 of 28
Princess Mette-Marit and Prince Haakon of Norway

Princess Marie-Chantel of Greece wore a Valentino gown for her wedding to Prince Pavlos in July 1995.

19 of 28
Prince Abdullah and Queen Rania of Jordan

20 of 28
Tim Taylor and Lady Helen of Windsor

Lady Helen of Windsor and Tim Taylor at their July 1992 wedding. Lady Helen's dress was designed by Catherine Walker.

21 of 28
Princess Diana and Prince Charles of Wales

Princess Diana and Prince Charles's wedding portrait from July 1981. The bride wore a gown designed by David and Elizabeth Emanuel.

22 of 28
Queen Noor and King Hussain of Jordan

In 1978, Queen Noor chose a Christian Dior gown for her marriage to King Hussein of Jordan.

23 of 28
Princess Caroline of Monaco and Phillipe Junot

King Constantine of Greece and Princess Anne Marie of Denmark at their 1964 nuptials.

25 of 28
Prince Rainier and Princess Grace Kelly of Monaco

Grace Kelly and Prince Rainier of Monaco in 1956. Kelly wore a gown by MGM costumer Helen Rose, who had dressed her for her films High Society and The Swan.

The Shah and Empress of Iran at their 1951 wedding. She wore a custom Christian Dior gown for the occasion.

27 of 28
Princess Elizabeth and Prince Mountbatten

Princess Elizabeth and Prince Mountbatten were married in 1947 at Westminister Abbey in London, her wedding dress designed by Norman Hartnell.

28 of 28
Wallis Simpson and the Duke of Windsor

The Duke and Duchess of Windsor had a low-key ceremony in 1937. The Duchess wore a Mainbocher creation, which is now held in the Metropolitan Museum of Art.

Next
The Best Dressed Guests at Pippa's Wedding 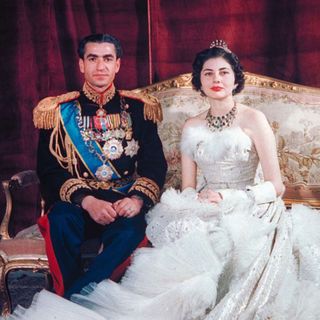