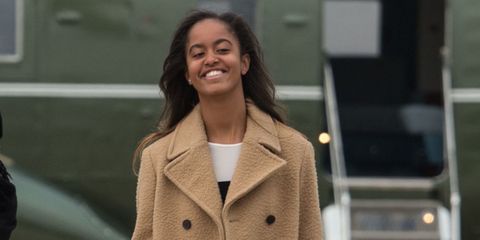 Following their European tour with First Lady Michelle Obama, the first daughters are bringing their chic sense of style to the streets of New York City for a father-daughter weekend with the President. Since moving into the White House, Sasha and Malia Obama's style has transformed along the way. Click through for a look back at the teenagers' best fashion moments over the years.

In one of her last appearances as First Daughter (😭), Malia wore a long camel coat over a black and white dress with heeled booties as she boarded Air Force One to attend President Obama's farewell address in Chicago.

Sasha Obama joined her parents for their family's final Christmas Tree lighting in D.C. She got in the holiday spirit, embracing one of the season's hottest fashion trends: velvet. The first daughter kept cozy in the December chill in a navy blue velvet coat by Opening Ceremony.

Arriving in Morocco, the girls looked polished and trendy in tailored shift dresses and choker necklaces.

At their first White House State Dinner, both in Naeem Khan gowns.

The Obamas return to The White House after vacationing in Martha's Vineyard.

President Obama and Sasha depart for their family vacation to Martha's Vineyard.

Malia Obama at Central Park during her father-daughter weekend in NYC with President Obama and sister Sasha.

Malia Obama wears a printed Alice & Olivia dress while arriving in London with First Lady Michelle Obama and Sasha for their European tour.

At the 50th Anniversary of the Selma to Montgomery civil rights march.

At the National Building Museum during Christmas season.

During the Presidential Pardoning of the turkey for Thanksgiving Day, 2014.

Arriving in Beijing, China for the First Lady's week-long tour.

Arriving at Joint Base Pearl Harbor-Hickam while vacationing in Honolulu, Hawaii.

Posing with family dog Bo Obama at the White House during the Christmas tree presentation.

At an arrival ceremony at Waterkloof Air Base in Centurion.

At Andrews Air Force Base before departing to Senegal, South Africa.

On a visit to Berlin, Germany.

Next
An Exclusive First Look at Balmain Spring 2017 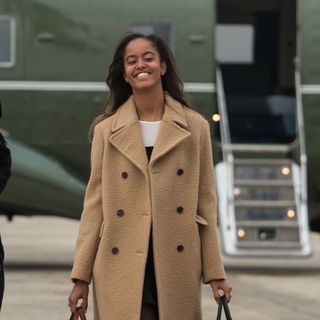 This content is created and maintained by a third party, and imported onto this page to help users provide their email addresses. You may be able to find more information about this and similar content at piano.io
More From Fashion
This Tech Exec's WFH Outfits Go Beyond the Hoodie
Failsafe Gift Ideas for Everyone on Your List
Advertisement - Continue Reading Below
Snag Some Adorable/Sexy New Lingerie (You Pick!)
Le Specs Are Up to 70 Percent Off for Black Friday
The Bright Red Sweater That's Actually a Neutral
Prepare Yourself for Everlane's Black Friday Sale
30 Wedding Gifts They'll Love...and Actually Use
Your Go-To List of the Best White Sneakers Ever
A Puffer Jacket Is Your Winter Essential
Replenish Your Underwear Stash With Fresh Options