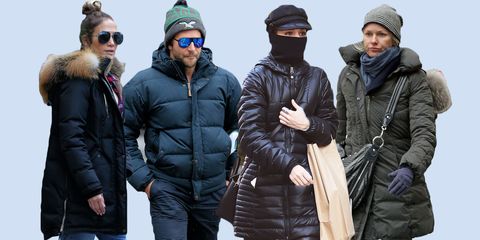 Sometime between late January and the first thaw, the will to survive overpowers the will to put together a real outfit with, like, layers and buttons. No, *thank* you. Turns out celebrities, with all their advantages, are also susceptible to this human weakness, as evidenced by the 40 endearing, entertaining photos ahead.

The only time you'll catch Rihanna looking less than Rihanna is literally when she's not playing herself on the set of the new Ocean's movie.

Or when she's completely over it.

TBH, this is what everybody looks like leaving hot yoga.

Even with wind-blown hair and full-length puffer, still looks a queen.

A long quilted coat: the chosen uniform of actors between takes everywhere.

And models leaving a workout.

And Yoko One leaning on the arm of a strapping young man. YES.

But the earmuffs are super cute!

Mood for the next three months.

The skipping child obliterates everything else.

Proof that, with the right attitude, you really can pull off anything.

A man who knows the power of an accessory, AKA DOGGO.

He could be napping under there for all we know.

Her face = all our faces.

More concerned about the jeans.

You get the sense he really regrets going outside.

And now, a short SJP interlude. Never has a woman looked more cheerful on the school run, even when it is probably too early in the morning *and* freezing, to boot.

Again, nothing else matters but the VERY GOOD BOY WALKING NEXT TO HER.

Whereas Kate Bosworth is flawless, as always.

The hair gives it away in this one...

This is like "could be my bodega guy's aunt and nobody would ever know because zero facial recognition." (But then the swarm of paps gives it away.)

Want that hat, though.

The kid's doing it right. (Or, "Do they make those attachable sleeping bag things for adults?")

Next
Behold, the Eye Candy That Is D&G's Men's Show 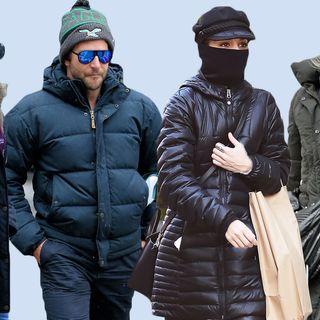