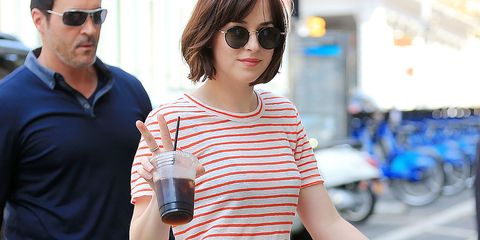 For no other purpose than fun and knowing with semi-creepy precision what to do the next time you find yourself in front of Kim or Taylor on line for Starbucks, here are 13 famous people's orders. Pay it forward, friends.

According to Buzzfeed, it's a vanilla nonfat chai. According to our eyes, that is not a tall.

Surprisingly not a PSL. In her 2008 tour rider, she asked for a grande iced caramel latte with 2 Sweet'N Lows, which is also not what we would've guessed.

That's probably a triple grande, nonfat, extra hot, no foam latte in there. (Lots of words for such a small drink.)

In 2009, Whitney Port holding a triple venti skinny vanilla latte was a news item, which kind of makes you miss the olden days.

What does one half of the duo that made a massive Starbucks cup an It accessory actually drink from there? An employee claims it's a venti sugar-free vanilla skim latte.

Issa half-caf grande soy latte for Ms. Holmes, a barista revealed. (No word on what Suri gets, but we will not rest until we find out.)

That'll be an almond soy latte for her and a venti cup of the tears of my enemies for me.

While their daughters prefer the same but with chai spices.

"We busy ladies need our coffee fix in the morning. My day doesn't really start until I've had my Starbucks latte," the supermodel said of her espresso-with-whole-milk habit.

She's gone vegan, but maybe now she just gets her usual grande nonfat white mocha, no whip with an *alternative mylk.*

Important: She confirmed to Time she does not only order only grande soy lattes, which seems like a wasted opportunity but also okay because we see how that would get old.

In a cute story, the "Chained to the Rhythm" chanteuse went incognito to a Chicago Starbucks, where she ordered a tall soy vanilla latte and a sandwich—and made the barista's day. 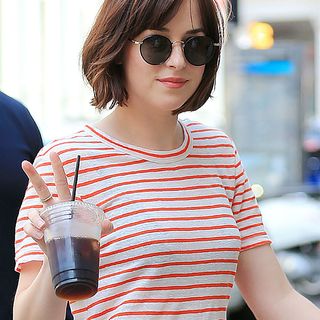