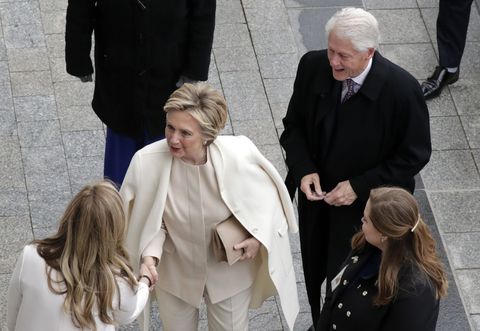 Hillary Clinton arrived at Donald Trump's inauguration Friday morning in Washington, President Bill Clinton, despite a bitter campaign that was mired in scandal and accusations of Russian interference. She wore a white coat in an echo of her white pantsuit at the Democratic National Convention, which was seen as an homage to the suffragette movement.

After arriving, she (or likely a member of her team) posted a message on Twitter about why she was there, even after a divisive campaign. "I'm here today to honor our democracy & its enduring values," the post reads. "I will never stop believing in our country and its future."

I'm here today to honor our democracy & its enduring values. I will never stop believing in our country & its future. #Inauguration

Her decision to attend was praised by people on both sides of the aisle, as a nod to the important of a peaceful transition of power.

Give Hillary her due-she showed up. Shows dignity and class. A real lesson for the House Dems who lacked respect and pouted at home.

Could not be prouder of @HillaryClinton today. She is the definition of an American patriot.

Whether you love her or hate her — and plenty do both — Hillary Clinton’s attendance of this inauguration shows an awful lot of class.