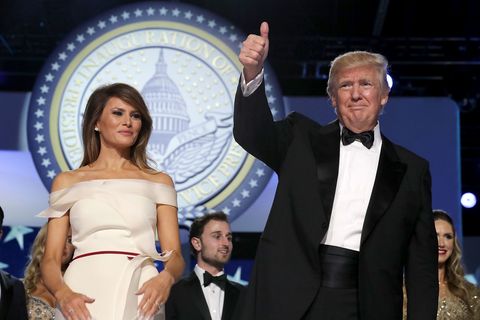 The inauguration of Donald Trump, a president who campaigned on a promise to "drain the swamp" of big money and corruption, is shaping up to be the most expensive in history.

According to the New York Times, the Trump inauguration is likely to total over $200 million when all is said and done. By comparison, Obama's 2009 inauguration cost about $53 million.

Security was the biggest line item, with over 28,000 local, state, and federal personnel on the payroll.

As for where the money comes from, it's a combination of both federal and local government and private funds. Trump's inaugural committee raised $100 million from a mix of corporations, wealthy individuals, and smaller-scale supporters.

Trump's team might not spend all the money they raised on the actual inauguration, though where the leftover money will go (and if we will ever know) remains to be seen.

Laura Beck Laura Beck is a Los Angeles-based TV writer and frequent contributor to Cosmopolitan.com — her work has appeared in the New York Times, New Yorker, Jezebel, and the Village Voice.
This content is created and maintained by a third party, and imported onto this page to help users provide their email addresses. You may be able to find more information about this and similar content at piano.io
Advertisement - Continue Reading Below
More From Politics
Moving Forward: We Need Better, Not 'Normal'
Could This Be the Last Year of Roe v. Wade?
Advertisement - Continue Reading Below
Meet the Next Presidential Pets, Major and Champ
Who Is Jen Psaki, Biden's Press Secretary?
Bernie Sanders at the Inauguration Is a Whole Mood
The Inaugural Concert Was a Cheesy Balm
Read VP Kamala Harris's Inauguration Speech
No, There Is No Inaugural Ball This Year
Kamala Harris Is "Momala" to Two Stepchildren
Read Amanda Gorman's Moving Inauguration Poem