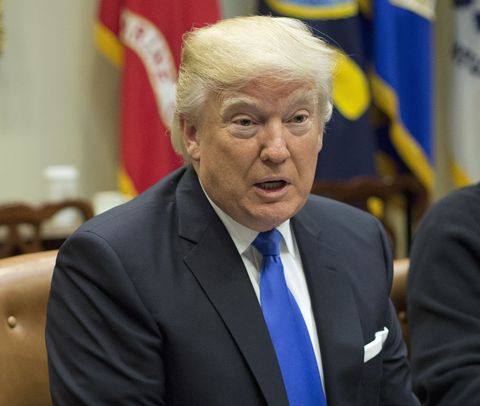 Trump has been fixated on his loss of the popular vote in the election and a persistent frustration that the legitimacy of his presidency is being challenged by Democrats and the media, aides and associates say.

His exaggerations about inauguration crowds and false assertions about illegal balloting have been distractions as advisers' have tried to launch his presidency with a flurry of actions on the economy.

Trump's spokesman, Sean Spicer, has twice stepped into the fray himself, including on Tuesday, when he doubled down on Trump's false claim that he lost the popular vote because 3 million to 5 million people living in the U.S. illegally cast ballots.

All 50 states and the District of Columbia have finalized their election results with no reports of the kind of widespread fraud that Trump is alleging.

"He believes what he believes based on the information he was provided," said Spicer, who provided no evidence to back up the president's statements.

If the president's claim were true it would mark the most significant election fraud in U.S. history—and ironically, would raise the same questions about Trump's legitimacy that he's trying to avoid. Yet Spicer repeatedly sidestepped questions about whether the Trump administration would investigate the allegations pushed by the president.

Rep. Elijah Cummings, ranking Democrat on the House Oversight and Government Reform Committee, said Wednesday his panel has already sent letters to the attorneys general in all 50 states asking for reports of any election irregularities.

"The president can join me and my staff," Cummings said on MSNBC. He also said he wants Congress to restore voting protections, citing a Supreme Court ruling that "gutted" key sections of the Voting Rights Act, particularly the provision requiring southern states to get clearance in advance from the Justice Department before legislating changes in voting laws and procedures.

Some Trump allies say Trump is justified in using his platform to defend his standing. They point to Georgia Democratic Rep. John Lewis' pre-inauguration statement that he did not see Trump as a legitimate president, as well as U.S. intelligence agencies' assessment that Russia meddled in the election in order to help Trump win.

"Segments of his own government keep driving this narrative," said Roger Stone, a longtime confidant. "I don't think it hurts to point it out." Key advisers in Trump's inner circle concede the focus on crowd claims and alleged voter fraud have been a distraction.

After Friday's inaugural festivities, the new president grew increasingly upset the next day by what he felt was "biased" media coverage of women's marches across the globe protesting his election, according to a person familiar with his thinking. Trump was particularly enraged with CNN, which he thought was "gloating" by continually running photos of the women's march alongside the smaller crowds that attended his inauguration the day before, according to this person, one of several White House aides and associates who spoke on the condition of anonymity because they were not authorized to speak publicly about private conversations.

Trump has had a tumultuous relationship with the press, frequently calling the media dishonest and insulting individual reporters by name at his rallies and on Twitter. Still, two people close to Trump said he expected his coverage to turn more favorable once he took office. Instead, he's told people he believes it's gotten worse.

The bad press over the weekend has not allowed Trump to "enjoy" the White House as he feels he deserves, according to one person who has spoken with him.

The result has been a full display of Trump's propensity for exaggeration and more. During an appearance at the CIA Saturday, he wrongly said the inaugural crowds gathered on the National Mall stretched to the Washington Monument, despite clear photo evidence to the contrary. And during a reception with lawmakers from both parties Monday night, he repeated his false assertion that millions of illegal immigrants provided Hillary Clinton's margin in the popular vote.