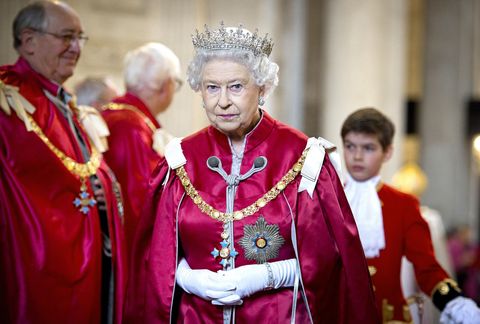 On Friday, Theresa May, the prime minister of Great Britain, became the first world leader to visit President Donald Trump since he's taken office, and one question (of the many) looming over the meeting was whether the Royal Family would extend an invitation to the Trumps for a formal state visit.

During a joint press conference on Friday, May confirmed that an invitation was extend to Donald and Melania Trump—and they accepted.

"I have today been able to convey her majesty the Queen's hope President Trump and the first lady would pay a state visit to the United Kingdom later this year, and I'm delighted the president accepted that invitation," she said.

It's not immediately clear when the state visit will take place and which members of the royal family will be in attendance.

The U.S. and Great Britain have what is considered a "special relationship," an informal term that refers to the nations' close political, diplomatic, economic and military ties. Trump, who said during prepared remarks that the countries' relationship has "never been stronger," also elicited laughter after a BBC reporter—whom May called on—posed a particularly tough question:

"Mr. President, you've said before that torture works. You've praised Russia, you've said you want to ban some Muslims from coming to America. You suggested there should be punishment for abortion. For many people in Britain, those sound like alarming beliefs. What do you say to our viewers at home who are worried about some of your views and worried about you becoming the leader of the free world?"

"This was your choice of a question? There goes that relationship.

The president later said he supports torture but would defer to his defense secretary, General James Mattis, on the topic. Mattis opposes torture. Trump said it was too early to tell how his relationship with Russia would be and didn't respond to the comment about abortion.

Michael Sebastian Michael Sebastian was named editor-in-chief of Esquire in June 2019 where he oversees print and digital content, strategy and operations.
This content is created and maintained by a third party, and imported onto this page to help users provide their email addresses. You may be able to find more information about this and similar content at piano.io
Advertisement - Continue Reading Below
More From Politics
SCOTUS Will Hear a Major Abortion Case
How to Help Black Lives Matter If You Can't Donate
Advertisement - Continue Reading Below
Does Your State Have a Tampon Tax?
What's Ranked-Choice Voting? Allow Us to Explain
Paid Leave for All Isn't Just a 'Women's Issue'
Yes, Caregiving Is Essential Infrastructure
Unforgettable Signs From the Protests
23 Ways Women Still Aren't Equal to Men
Ma’Khia Bryant: What We Know
Greta Thunberg Expertly Trolled Boris Johnson