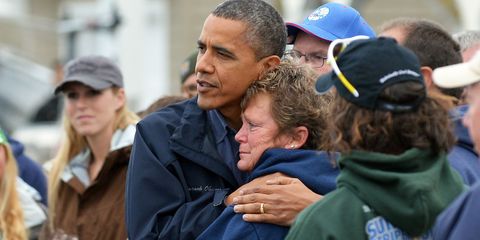 Barack Obama's White House photographer Pete Souza has been not-so-subtly trolling Donald Trump since the election. On Instagram, he's sneakily mocked Trump's first 100 days in office, awkward hand-holding with the First Lady, and disrespect for women, to name a few—each with a fitting photo of President Obama. Now, his latest jab is targeted at the president's response to Hurricane Harvey. 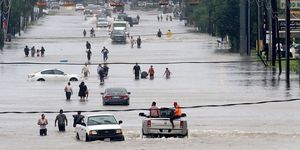 Donald and Melania Trump jetted down to Texas yesterday to meet with local officials and survey relief efforts in areas affected by the tragedy. But Trump "didn't meet a single storm victim, see an inch of rain, or get near a flooded street," Politico reports. He did, however, make a rally-style speech in Corpus Christi, TX, where he praised the "turnout" of people who gathered to watch him from the street.

Trump to hurricane victims in Corpus Christi, TX: "Thank you everybody. What a crowd, what a turnout." (via Reuters) pic.twitter.com/kVe3f8NmTL

Souza responded by sharing a photo of President Obama consoling a victim of Hurricane Sandy in 2012. In the shot, the then-POTUS embraces a distraught woman identified as Dana Vanzant amidst storm wreckage in New Jersey. (Photos of Trump personally meeting Harvey victims have yet to surface.)

"At a time like this, it shouldn't be about selling baseball hats or commenting on crowd size," Souza included in his caption. He also posted a link to donate to relief efforts in his Instagram bio.

President Obama with a victim of Hurricane Sandy. There are no Democrats or Republicans hurting in Houston; there are just Americans. At a time like this, it shouldn't be about selling baseball hats or commenting on crowd size. It's about helping our fellow human beings. Pets too. This storm is catastrophic, not epic. Thousands of people are affected. Please consider donating to the many charities doing good work in Texas and other states to come. I am donating to the Red Cross and other local charities today but please feel free to comment on other worthy charities that you would recommend to me and others. (UPDATE: As one of your fellow followers points out, The NY Times has a good list of how to help victims and avoid scams. I posted the link in my profile. But keep suggesting others.)

Hours later, he followed up with another photo of Obama helping disaster victims, this time during the aftermath of a deadly tornado that struck Joplin, Missouri in 2011. Souza quoted the former president's speech during a memorial service in the caption: "How we respond when the storm strikes is up to us. How we live in the aftermath of tragedy and heartache, that's within our control. And it's in these moments, through our actions, that we often see the glimpse of what makes life worth living in the first place."

President Obama greeting people affected by an F5 tornado in Joplin, Missouri that killed more than 100 people in 2011. “But that does not mean we are powerless in the face of adversity,” he said. “How we respond when the storm strikes is up to us. How we live in the aftermath of tragedy and heartache, that’s within our control. And it’s in these moments, through our actions, that we often see the glimpse of what makes life worth living in the first place."

But wait, where was Obama for Hurricane Katrina? After criticism of Trump's Harvey response began, conservatives (and, in some cases, bots) clapped back questioning what Obama did for Katrina victims during his presidency. To fact check, Obama was not yet in office when the disastrous hurricane hit in 2005. (He was elected in 2008 and inaugurated in 2009.) At the time, George W. Bush was president and Obama was an Illinois Senator; but even then, Obama was calling out the federal government for its slow response to the disaster. He also visited victims at the Astrodome, which served as a refugee center, in September 2005, along with President George H.W. Bush and former president Bill Clinton.