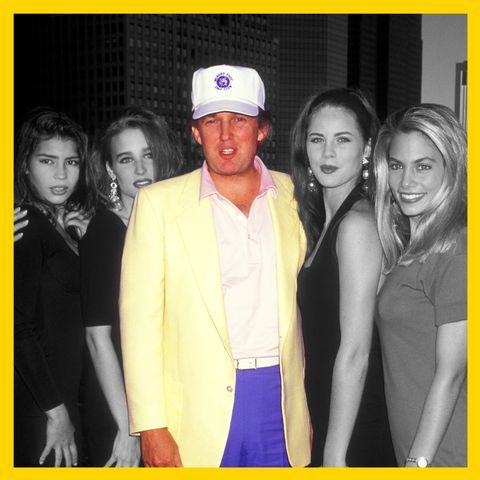 In 2016, President Donald Trump tweeted, “Nobody has more respect for women than me!” Although his sordid history with women has been well-documented (to date, at least 25 women have accused the POTUS of sexual misconduct), he remains in office, seemingly immune to the forces of the #MeToo movement.

But a new book by journalists Barry Levine and Monique El-Faizy aims to uncover parts of Trump’s past that shouldn’t longer be ignored. In the following passages excerpted from All the President’s Women: Donald Trump and the Making of a Predator, we learn of Trump’s egregious and disturbing misconduct around young women trying to make it in the modeling world in the early 1990s.

Trump’s hands, the size of which would later become the subject of significant public curiosity, were infamous for other reasons back then, according to sources. “He was gropey...he had his hands in the most inappropriate places, always,” [NaKina] Carr said. [Editor’s note: NaKina Carr was working as a runway model for Oscar de la Renta.] “When he went in to kiss someone, the hand always went to either the hip or the butt. He was also really good when he did pictures or when he’d side-hug someone. He’d always get his hand on the boob. Every time.” Stories about Trump and his hands circulated within the modeling community. At one modeling event, Trump allegedly went down a line of women feeling their bodies to guess their dress size. Backstage at a lingerie show, he is said to have moved his hands all over a model’s breasts under the guise of inspecting the bra’s fabric.

“If you’re over twenty-one, you don’t have to worry.”

Another trademark Trump move was honed back in the early 1980s. “I saw this several times: When he met a girl, he’d immediately move in to kiss her, not shake her hand or say ‘Hello, how are you?’ He’d immediately put his mouth on her,” Carr said. “I saw him many times go straight to the mouth, to kiss them on the mouth, and they would turn their cheek. But a lot of them didn’t because they knew he was the moneyman and it was a way up.”

Among modeling insiders, Trump had a reputation at the time for preferring the younger girls. “If you’re over 21 you don’t have to worry,” Carr said she was told.

Stacy Wilkes competed in the 1991 [Look of the Year] contest as a 16-year-old, representing the United States. She remembers Trump coming into their dressing area during the contest, more than once. “I would feel really uncomfortable, because every time we would change, it was like Trump would find a reason to come backstage to see all the teenagers,” she told us. “When you’re doing a runway show, they have to strip you down and change you.... There was no need for him to be back there.” Trump never tried to justify his presence backstage but would just walk in and start making jokes. The girls didn’t feel that they were free to complain. “We were afraid to say anything bad when he was around because we didn’t want anything to hurt our chances of winning,” Wilkes said. “We were all young teenagers.” Wilkes’s roommate ended up spending the night with one of the celebrity judges, Wilkes said, and later won one of the prizes.

Models report similar things happening during the competition the following year. Shawna Lee was only 14 when she was the entrant from Canada in the 1992 Look of the Year contest. She also attended an event on a yacht. This time the girls were asked to walk one by one down a staircase and dance in front of Trump and [John] Casablancas [of Elite agency], who were seated in chairs at the bottom. “It was a very small area and I could see them laughing and making fun of the girls,” most of whom were 15 and 16 years old, she said in an interview for this book. “You know, these men were older than my father at the time, looking girls up and down and objectifying them. It was just kind of gross. I don’t think doing that had anything to do with being a professional model.”

“When you’re doing a runway show, they have to strip you down and change you....There was no need for him to be back there.”

Lee told us that Trump wandered around their dressing room, too, before the runway show. “I was thinking, What’s that old guy doing back here?” she said. “I was changing and looked up as he was looking and doing a slow stroll by, checking out the girls.”

Dressing rooms weren’t the only places where Trump barged in on women. In the early 1990s, a world-famous supermodel had flown to New York to attend a fashion event and was staying in a suite at the Plaza hotel. She was seeing another industry insider and they had gone back to her room. The two were in bed together when they heard the door open, according to the man, who gave an interview for this book requesting anonymity because both he and the supermodel still work in the industry and fear retribution. Thinking it was housekeeping, the pair sat up in bed and hollered that they didn’t need anything. A few seconds later, the door to the bedroom opened. “It’s Donald standing there,” the man said in his interview. Trump had let himself in. The supermodel and her companion were stunned.

“I said, ‘What the hell are you doing?’” the man said. “We’re naked, so she pulled up the covers and we’re freaked out. I couldn’t believe it. He looks in the room and he took a good look at both of us and he slammed the door really hard, like in anger. And that really pissed me off, that he came in and slammed the door with this arrogant attitude.”

The two threw clothes on and ran out after Trump, arriving just as his elevator was leaving. They grabbed the next elevator and rushed into the lobby. Trump was already in the middle of the crowd talking to people. “I was livid,” the man said. “She’s hysterical, crying.... And I went at him, and just as I was about to grab him, his bodyguard jumped between us and pushed me back. I was screaming at him, ‘What the fuck are you doing, coming into my room?’ It was a scene.”

While the bodyguard was trying to push the man away, Trump approached. “I hate sloppy seconds,” Trump said. “It was loud enough for her to hear,” the man said. “Like, she’s holding on to my arm and trying to pull me away, too, and she heard him...and she had the courage to say to him, ‘You fucking bastard.’ So we walk away. We got shoved back into the elevator,” he recounted.

Later, back in their room, the supermodel revealed to her companion that Trump had gotten her phone number from her agent and had been calling her for weeks. She had repeatedly rebuffed him. “And then it dawned on us...that had I not been in the room, it would have been a scene,” the man said. “She wanted nothing to do with him.”

From the book ALL THE PRESIDENT’S WOMEN: Donald Trump and the Making of a Predator by Barry Levine and Monique El-Faizy. Copyright © 2019 by Scoop King Press, Inc. Reprinted by permission of Hachette Books, New York, NY. All rights reserved. 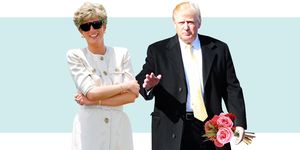 Dear Trumps, You're Not Victims.

Monique El-Faizy Monique El-Faizy is a Paris-based journalist and the author of God and Country: How Evangelicals Have Become America’s New Mainstream.
Barry Levine Barry Levine is a veteran investigative reporter and editor in print and television.
This content is created and maintained by a third party, and imported onto this page to help users provide their email addresses. You may be able to find more information about this and similar content at piano.io
Advertisement - Continue Reading Below
More From Politics
For Teachers, Going to Work Can Mean Life or Death
Want to Help Moms? Prioritize Menstrual Equity
Advertisement - Continue Reading Below
Abortion Rights Start at the State Level
All of Your Abortion Questions Answered
The Texas Abortion Snitch Site Is Having a Bad Day
The Future of Afghan Women Depends on Us
How You Can Help People in Afghanistan
Andrew Cuomo Has Resigned as NY Governor
Gwen Berry: Athlete, Activist, Olympian
The Anti-Choice Endgame: Power And Control