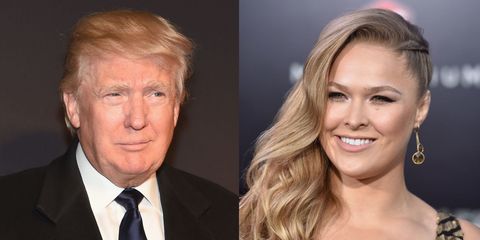 Tip #1 for running for POTUS—know *exactly* who's on your side before you say the wrong thing and it's filmed and you look a little silly. (Again.)

That's exactly what happened to Donald Trump, after he stated that UFC fighter Ronda Rousey is pro, um, him, in an interview with CNN. Asked whether women should fight in combat roles, he responded: "I guess the answer is yes, because they're really into it. Some of them are really, really good."

He then added: "I'll tell you what, I know some women that are just—Ronda Rousey is an example, who likes me...I'd take her on my side as a fighter."

Except, sorry to be the bearer of bad news, but she doesn't like you, DT. She told CNN a week prior to his interview, "I wouldn't vote for him. I just really wouldn't trust the guy with running my country, that's all," she said. "I'm not really going to get into specifics of it, but, I mean, I don't want a reality TV star to be running my country."

Samantha Leal Senior Web Editor I'm Sam, the senior editor at MarieClaire.com.
This content is created and maintained by a third party, and imported onto this page to help users provide their email addresses. You may be able to find more information about this and similar content at piano.io
Advertisement - Continue Reading Below
More From Politics
A Guide to Celebrity Presidential Endorsements
When Will We Know Who Won the Election?
Advertisement - Continue Reading Below
A Guide to How the Electoral College Works
Just 40 Celebrities Doing Their Civic Duty
How the 2020 Election Will Impact Dreamers Like Me
Should Felons Vote? Ask This Rep With a Record
Girl Scouts Delete Tweet About Supreme Court
How to Track Your Absentee Ballot This Year
How to Demand Justice for Walter Wallace Jr.
America Has a Dark History of Forced Sterilization