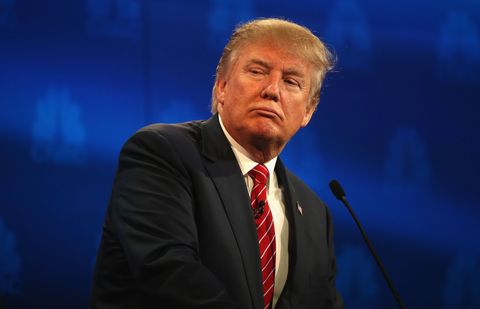 Donald Trump, enemy of bald eagles, participated in yet another campaign rally, and this time his animosity was directed toward someone other than Rosie O'Donnell. Naturally, we're talking about the poor, traumatized person who put together Donald Trump's microphone, a routine task that turned into a public shaming.

"By the way, I don't like this mic," Donald Trump said during a Florida rally on January 13th. "Whoever the heck bought this mic system—don't pay the son of a bitch that put it in. This mic is terrible. Stupid mic keeps popping. Do you hear that, George? Don't pay 'em. Don't pay 'em. You know, I believe in paying, but when somebody does a bad job–like this stupid mic–you shouldn't pay the bastard."

We're not sure who "George" is, but one can only assume that Trump is referring to either his personal assistant or the broken spirit of George Bush. Either way, he had more to say on this important topic: "Terrible. Terrible. It's true. And you gotta be tough with your people, because they'll pay, they don't care, they'll pay. So, we're not going to pay. I guarantee, I'm not paying for this mic. Every two minutes, I hear, like: 'Boom, boom.'"

Ugh, Donald Trump's life is so hard. If only Sean Penn could come in and help rectify this situation.

Mehera Bonner Contributor Mehera Bonner is a news writer who focuses on celebrities and royals.
This content is created and maintained by a third party, and imported onto this page to help users provide their email addresses. You may be able to find more information about this and similar content at piano.io
Advertisement - Continue Reading Below
More From Politics
In Conversation With Secretary Granholm
Laphonza Butler on What's Next for EMILY's List
Advertisement - Continue Reading Below
Anita Hill Believes We Can End Gender Violence
For Teachers, Going to Work Can Mean Life or Death
Want to Help Moms? Prioritize Menstrual Equity
Abortion Rights Start at the State Level
All of Your Abortion Questions Answered
The Texas Abortion Snitch Site Is Having a Bad Day
The Future of Afghan Women Depends on Us
How You Can Help People in Afghanistan