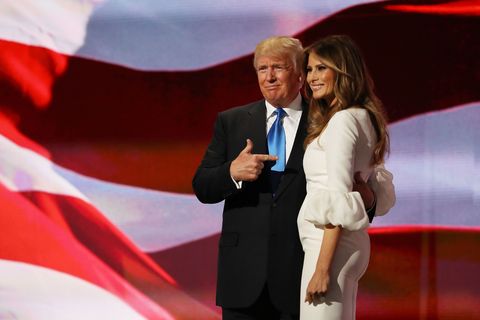 Donald Trump is a prolific Twitter user—it's a tentpole of his entire presidential campaign. On Thursday, Trump told Good Morning America his wife Melania helps him tweet, saying she advises him "all the time." Melania, he said, "can give me pretty good advice, believe me."

Trump's tweets are often filled with hate—suggesting his political opponents be jailed, slamming anyone who he feels slighted him, criticizing the appearance of women he finds unattractive or unworthy, fueling widely debunked and often dangerous conspiracy theories ( including around the election being rigged), shaming overweight people, and so on.

One of his lowest points on Twitter came after the first debate with Hillary Clinton, when Trump slammed former Miss Universe Alicia Machado in early morning tweets, suggesting she had made a sex tape that's never actually been revealed.

And so it was particularly interesting to hear Melania's plans should she become first lady—she'd like to address bullying on social media.

"I would focus on helping children and women and also about social media. In the 21st century, what's going on, it's very hurtful to children — to some adults as well — but we need to take care of children. We need to teach them how to use it. What is right to say, what is not right to say, because it is very bad out there and children get hurt by social media, by what's going on and by negativity."

This prompts the question: Has she ever actually read her husband's tweets? Watch the full interview below:

Michael Sebastian Michael Sebastian was named editor-in-chief of Esquire in June 2019 where he oversees print and digital content, strategy and operations.
This content is created and maintained by a third party, and imported onto this page to help users provide their email addresses. You may be able to find more information about this and similar content at piano.io
Advertisement - Continue Reading Below
More From Politics
What Liberation Means This Juneteenth
Kathryn Garcia: It's Time to Step Up or Shut Up
Advertisement - Continue Reading Below
A Valedictorian Speaks Out Against Abortion Bans
Standing Between Care and Violence
Seeking Healing a Century After the Tulsa Massacre
What to Know about Texas's Abortion "Trigger Ban"
A New Book Invites Us to Rethink Menstrual Equity
We Must Remember George Floyd's Legacy
This Is How Much Joe Biden Is Worth
Joe Biden's Granddaughter Is His Biggest Fan