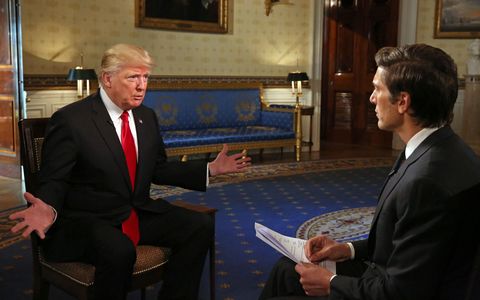 President Donald Trump gave his first TV interview as commander in chief on Wednesday night, spending an hour at the White House with ABC News' David Muir. The interview touched on a number of topics, from Trump talking about his own popularity to expressing concern over violence in Chicago. Here are five of the evening's most talked-about moments:

1. He's still fixated on the size of the inauguration crowds.

Pres. Trump 'won’t allow' anyone to demean people in Inauguration crowd. "We had the biggest audience in the history of inaugural speeches." pic.twitter.com/Rt1c2f4Y9U

As has been widely reported—and contested by the president and his staff—in recent days, the turnout for Donald Trump's swearing-in was not as large as President Obama's first and second inauguration, and was also smaller than the Women's March on Washington. But Trump continues to insist that it was the "biggest audience in the history of inaugural speeches." This time, he added a new point of clarification:

"In terms of a total audience including television and everything else that you have we had supposedly the biggest crowd in history."

He also said the speech he gave in front of The Memorial Wall at the CIA, in which he again talked about the size of the crowd as well as his own popularity, was a "home run":

According to reports, however, the reaction among CIA officials was mixed.

Either way, on Trump's fifth day in office, he's still talking about the size of his crowds.

2. He says the only reason he lost the popular vote is because he didn't campaign for it—and because of allegedly massive voter fraud.

Trump lost the popular vote to Hillary Clinton by roughly 3 million ballots, but the president has said this was intentional—he was campaigning to win the electoral college. Trump reiterated this to Muir during the interview.

Then Trump suggested that he lost the popular vote because of widespread voter fraud. This simply is not true.

Muir pressed him on this, insisting that eliminating millions of votes—all of which, Trump said, were votes against him—strikes at the foundation of American democracy. It's a mind-bending exchange:

President Trump to launch investigation into alleged voter fraud: “I want the voting process to be legitimate." https://t.co/zjjJ6vMqXU pic.twitter.com/h7zavlBWoa

3. He insists, again, that Mexico will pay for the wall (even though they've said they won't).

Pres. Trump: Construction of border wall to begin "in months"; Mexico will "absolutely" reimburse the U.S. for wall. https://t.co/H0uApVrTYu pic.twitter.com/GCK7ISnF8F

Trump said construction on the wall—which some estimates say will cost American taxpayers $25 billion and take at least four years to complete—will begin in a matter of months and that Mexico will pay for it. Not right away, he said, because that would hold up construction. But America will eventually recoup the costs from Mexico.

Mexican President Enrique Peña Nieto reiterated this week that Mexico will not reimburse America for the project. "I have repeatedly said, 'Mexico will not pay for a wall,' " Peña Nieto said in a video released late Wednesday night.

4. He said he couldn't hear the hundreds of thousands of women protesting him in D.C.

Muir asked Trump about the Women's March that overwhelmed Washington, D.C. the day after he was sworn in. Although the demonstrators stood right outside the gates of the White House, Trump told Muir, "I couldn't hear them." He also tried to change the subject to the pro-life march taking place in Washington on Friday, suggesting it would be just as large.

5. He suggested Obama won the White House partly because of voter fraud—and then, in the same breath, praised Obama's letter to him.

Later in the interview, Trump spoke again of his "tremendous victory" and continued his claim about voter fraud, suggesting—in a roundabout way—that it's what helped propel Obama to victory.

"But, again, I ran for the electoral college. I didn't run for the popular vote. What I'm saying is if there are these problems that many people agree with me that there might be. Look, Barack Obama—if you look back—eight years ago when he first ran—he was running for office in Chicago for we needed Chicago vote.

"And he was laughing at the system because he knew all of those votes were going to him. You look at Philadelphia, you look at what's going on in Philadelphia. But take a look at the tape of Barack Obama who wrote me, by the way, a very beautiful letter in the drawer of the desk. Very beautiful. And I appreciate it. But look at what he said, it's on tape. Look at what he said about voting in Chicago eight years ago. It's not changed. It hasn't changed, believe me. Chicago, look what's going on in Chicago. It's only gotten worse."

Then Trump took a sharp turn to the letter Obama left for him. Tradition holds that outgoing presidents leave a note or letter for their successor. Trump heaped praise upon Obama's letter (though he declined to share it with the public, breaking from tradition). Trump even said he called Obama to thank him for the letter.

Pres. Trump says letter left for him in Oval Office desk by Pres. Obama is 'beautiful.' "So well written. So thoughtful." #POTUSonABC pic.twitter.com/HtxsgsmTAd

Michael Sebastian Michael Sebastian was named editor-in-chief of Esquire in June 2019 where he oversees print and digital content, strategy and operations.
This content is created and maintained by a third party, and imported onto this page to help users provide their email addresses. You may be able to find more information about this and similar content at piano.io
Advertisement - Continue Reading Below
More From Politics
Give Domestic Workers the Protections They Deserve
Kristin Urquiza Wants Justice for COVID-19 Victims
Advertisement - Continue Reading Below
A Breakdown of VP Harris's Net Worth
WH Announces Removal of the Hyde Amendment
What Liberation Means This Juneteenth
Kathryn Garcia: It's Time to Step Up or Shut Up
A Valedictorian Speaks Out Against Abortion Bans
Standing Between Care and Violence
Seeking Healing a Century After the Tulsa Massacre
What to Know about Texas's Abortion "Trigger Ban"