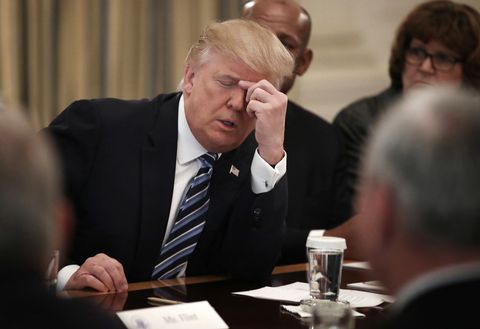 Donald Trump has gone against tradition in so, so many ways already during his presidency and now we can add one more way to that list. The POTUS announced on Twitter (where else?) that he won't be attending the White House correspondents' dinner, CNN reports.

The annual black-tie event raises money for journalism scholarships. Typically, the president, along with celebrities and members of the press, attend. The White House correspondents' dinner is usually a light-hearted event where the press and president playfully rib each other. You might remember it as the occasion of Barack Obama's famous mic drop.

Several media outlets had already withdrawn from the event in protest of how the president and the White House have treated the press, according to CNN.

The White House correspondents' dinner is scheduled for April 29, but how many people will actually attend seems very much up in the air.