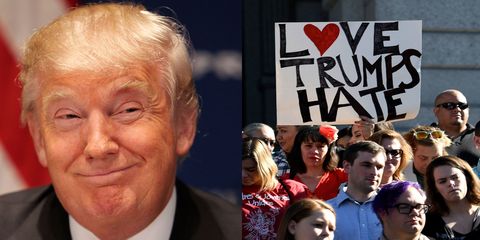 President Trump made a shocking announcement this week, tweeting that transgender individuals will be banned from serving in the U.S. military. In the series of tweets, Trump wrote, "Our military must be focused on decisive and overwhelming victory and cannot be burdened with the tremendous medical costs and disruption that transgender in the military would entail."

People all over the world have been standing in staunch opposition to Trump's bigoted announcement, with celebrities using social media to make their feelings on the matter clear. And now, GLAAD and Billboard have brought together a group of musicians and artists who refuse to let Trump's hateful ideas, about transgender military personnel, win.

The video features Sia without her trademark wig, Rita Ora, Dua Lipa, Michael Stipe, cast members of Orange Is The New Black and RuPaul's Drag Race, and other celebrities who refuse to stand by while President Trump attempts to implement discriminatory legislation.

Amy Mackelden Amy Mackelden is a freelance writer, editor, and disability activist.
This content is created and maintained by a third party, and imported onto this page to help users provide their email addresses. You may be able to find more information about this and similar content at piano.io
Advertisement - Continue Reading Below
More From Politics
For Teachers, Going to Work Can Mean Life or Death
Want to Help Moms? Prioritize Menstrual Equity
Advertisement - Continue Reading Below
Abortion Rights Start at the State Level
All of Your Abortion Questions Answered
The Texas Abortion Snitch Site Is Having a Bad Day
The Future of Afghan Women Depends on Us
How You Can Help People in Afghanistan
Andrew Cuomo Has Resigned as NY Governor
Gwen Berry: Athlete, Activist, Olympian
The Anti-Choice Endgame: Power And Control