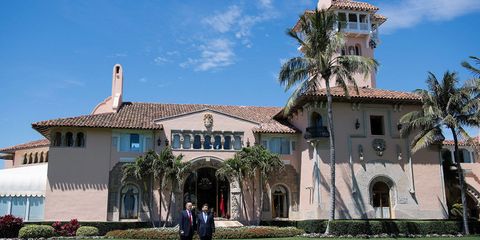 A spokesperson for Trump's properties said in a statement, "Our teams at our four properties in Florida are taking all of the proper precautions and are following local and Florida state advisories very closely to help ensure that everyone is kept safe and secure."

According to New York magazine, "Irma could send as much as ten feet of water onto the Mar-a-Lago property, which would likely cause water damage to some of its buildings."

USA Today reports that Trump also owns a "chateau" on the island of St. Martin, which has already been very badly hit. Hurricane Irma has so far claimed six lives on the island, and the devastation caused has been awful, destroying homes, schools, and the airport.

As for Mar-a-Lago, New York magazine writes, "The waters will begin to threaten priceless items, such as 'The Visionary,' a portrait of Trump once described by Playboy as showing him with 'skin glowing like the top floors of Trump Tower at sunset.'"

Amy Mackelden Amy Mackelden is a freelance writer, editor, and disability activist.
This content is created and maintained by a third party, and imported onto this page to help users provide their email addresses. You may be able to find more information about this and similar content at piano.io
Advertisement - Continue Reading Below
More From Politics
What Is Mutual Aid? For One, Not a Trend
How to Help Texans During the Winter Storm Crisis
Advertisement - Continue Reading Below
Hate Crimes Against Asian Americans Are Rising
Anti-Trans Bills Are in the Works Across the U.S.
Vanishing Act
The Women Who Took on ISIS—and Won
Yes, Trans People Belong in Sports
I’m a Parkland Survivor. Rep Greene Must Resign
Why Indian Farmers Have Been Protesting for Months
AOC Opens Up About Her Trauma