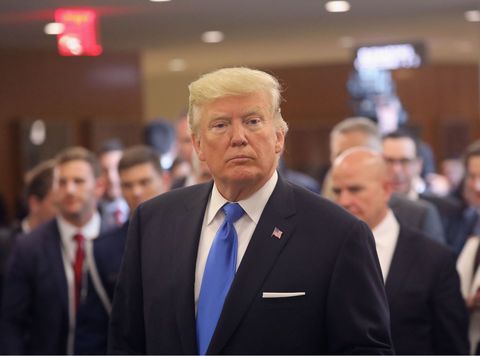 Since the devastating hurricane in Puerto Rico (which is, as a reminder, a territory of the U.S.), Donald Trump has spent most of his time on Twitter complaining about the NFL and attempting to create even more division in our country. People have been calling for POTUS to address the situation in Puerto Rico, and good news! He finally tweeted. Bad news: The tweets were a huge disappointment for many people.

Texas & Florida are doing great but Puerto Rico, which was already suffering from broken infrastructure & massive debt, is in deep trouble..

...It's old electrical grid, which was in terrible shape, was devastated. Much of the Island was destroyed, with billions of dollars....

...owed to Wall Street and the banks which, sadly, must be dealt with. Food, water and medical are top priorities - and doing well. #FEMA

Maybe it was a good thing he wasn’t tweeting about Puerto Rico pic.twitter.com/DpFRlVdhwh

So @realDonaldTrump continues his attack on people of color. Blaming the victims is a dear construct of White Supremacy. https://t.co/CUVHicr9pJ

I remember this scene from Goodfellas. "You had a Hurricane? Fuck you pay me" pic.twitter.com/wL4nqEdLf8

Americans, Mr. President. Americans are in deep trouble. For God's sake, many of us have friends & family we haven't even heard from. https://t.co/OBglAjtR1D

In short—disappointed, but not surprised.

Mehera Bonner Contributor Mehera Bonner is a news writer who focuses on celebrities and royals—follow her on Instagram.
Advertisement - Continue Reading Below
More From Politics
Hope Is Roe's Last Chance
Is Any Republican Running Against President Trump?
Advertisement - Continue Reading Below
Get to Know CBS News Anchor Norah O'Donnell
Everything We Know About Senator Warren's Husband
Mayor Pete's Husband Would Be a "First Gentleman"
How a Parkland Mom Turned Her Grief into Action
He Voted for Trump. She Voted for Bernie.
How Guerrilla Feminists Are Fighting Femicide
Who Was Mayor Pete's Father, Joseph Buttigieg?
Nancy Pelosi, Icon, Ripped Up Trump's SOTU Address