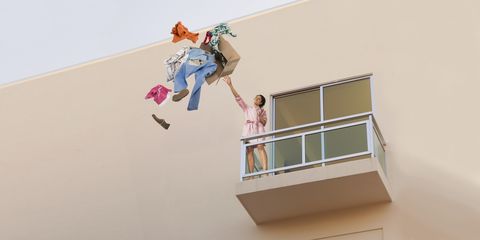 A New York City judge has officially given the okay to getting divorced over Facebook—but only as a last resort. The New York Daily News reports that a woman filed her divorce papers via a Facebook message after she couldn't get in touch with her husband any other way.

Ellanora Baidoo, 26, got married to Victor Sena Blood-Dzraku in a civil ceremony back in 2006, but things went south not long after that. Now, they never even see each other, and only communicate over the phone or on Facebook.

Blood-Dzraku has no fixed mailing address and no place of employment, and refused to show up to receive his divorce papers. Baidoo even hired a private detective and couldn't find him. So a judge gave consented to a last-ditch effort to file the papers through a Facebook message.

The first message was sent last week, and so far, no response. Also: no surprise.

Now that the precedent is set, there's legal ground for the practice to take hold across the country. We live our lives on Facebook, so it makes sense to reach out to someone that way if all else fails. Plus, a study has shown that using Facebook a lot can make your marriage less happy, because you're monitoring your spouse all the time and it's easier to reconnect with that ex who got away. So if it's causing divorces...why not use it to facilitate your split, too?

Body-Positive Win: Facebook Gets Rid of That "Feeling Fat" Status

Jennifer Lopez Makes a Heart-Rending Confession About Her Divorce