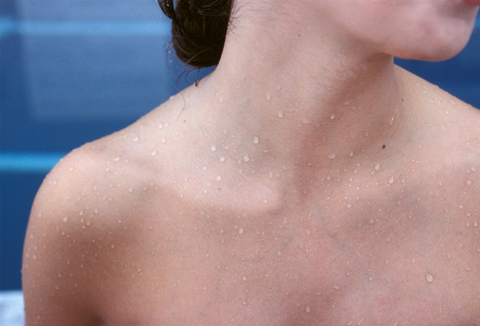 As my roommate and I stepped in the locker room of the Korean spa, we immediately realized we had made a mistake. There were women brushing their teeth, women drying their hair, women cloaked in plastic capes in a sitz bath, where herb-infused steam is believed to purify the vagina and prevent menstrual cramps.

And they were all buck naked.

I didn't know what a Korean spa was when I purchased the admission on Groupon. I was interning at a nonprofit when I moved to Dallas in 2009, making just over minimum wage, which meant eating a lot of rice and ramen, picking up babysitting gigs to pay the electricity bill, and existing in a state of constant stress. I used Groupon a lot. It was the only way I could occasionally go to a nice dinner with my boyfriend, or get a haircut and color from a salon that didn't operate inside a mall.

So when my roommate and I saw the opportunity to go to a spa—any spa—for $12, we took it. We tried to do a little research about the spa before we went, but the website didn't offer much insight into what you actually do to relax. But there were dozens of photos of the facilities—walls covered in amethyst stones, a "fire sudatorium" that promised to be the most intense detoxifying experience on the planet—and we figured, Sure, why not?

When we first arrived, it looked like any other gym or spa. A cashier takes your cash (or redeems your Groupon, in our case), hands you a wristband key, and chooses the right-sized spa uniform for you to wear in the clothed areas, like the food court, saunas, and movie theater. We took off our shoes before leaving the reception area, as is customary, and headed toward the locker room.

It was there that I saw the nakedness and realized I was going to have to get naked too.

No matter how "perfect" your body is—and according to conventional standards, mine is certainly not—being entirely naked in a room full of women is the stuff of nightmares. I didn't even wear sleeveless shirts until my mid-20s, and now I was supposed to take it all off? In front of a bunch of strangers? I was immediately terrified at the idea of other people seeing my body in all its fat glory.

My roommate and I stripped as far down as we were comfortable and walked sheepishly toward the showers, holding our boobs and using towels to cover our crotches. There was no more privacy behind those steam-clouded doors. The "wet area" of the spa was about the size of a basketball gym, lined with open banks of showers and booths for add-on services like massages and body scrubs. Even the women who worked there wore sheer bras and panties as they scrubbed down blissed-out patrons.

No matter how "perfect" your body is, being naked in a room full of women is the stuff of nightmares

We showered quickly, only because it was required to enter the hot tubs. Then after sitting in the tub for only a few minutes, not nearly long enough to ease our sore muscles, we showered again, returned to our lockers, and put on the spa uniforms. All the while, women of all ages, shapes, races, and sizes were applying lotion to the hard-to-reach places on their bodies, carrying on conversations. I wondered if they were unaware that none of us were wearing clothes.

Once you get out into the "dry area" of the Korean spa, the objective is to sweat. These spas operate on a philosophy that sweating purifies the body, drawing out toxins through pores. You're not naked in this area, but the spa uniform consists of a baggy T-shirt and knee-length shorts, which is enough to make anyone feel like a real frump.

Each room is heated to temperatures that exceed 100 degrees, and some even have baskets of herbs that are intended to induce sweating. And sweat you do. The recommended time in each of the spa's eight dry saunas is around 15 minutes, which is plenty of time to make you feel like you've been running for an hour. Each sauna offers different detoxification properties, and guests are encouraged to visit each one for total purification.

Sometimes pushing the body to its limits can feel really, really good, and this turned out to be one of those instances. As I sweated in the various rooms, it felt as if all the stress in my body was being drawn out through my pores. Maybe it was psychosomatic, but it did feel purifying. I felt more mental clarity, even though my body was exhausted.

Modesty was somewhat less of a concern as my roommate and I headed back to the showers to rinse off the huge amounts of sweat covering our bodies, but I was still terrified of all those women looking at me. I quickly showered and headed home for a night of the best sleep I've ever had in my life.

Still, however weirded out or uncomfortable we were during that trip, it was not enough to dissuade us from going back. We started scouring Groupon for deals and buying full-price passes when they weren't available, trying to go to the spa at least once or twice a month. Each visit was progressively easier. On the second trip, I was still trying to cover myself with a towel as I walked to the shower. Fast-forward three years, and I happily walk around naked, acrobatically apply my own lotion, and blow-dry my hair in front of a full-length mirror. I bring a full array of spa products and use these incredible Korean washcloths for exfoliation. When I get a little overheated, I lie out fully nude on a plastic chaise lounge with a cool cloth over my forehead, in a pose that would inspire works by great painters.

I've tried to pinpoint the exact moment that I stopped giving a damn about whether people were looking at my body, and I think it was probably when I sat in the hot tub with a group of elderly Korean women. They were laughing, gossiping, and truly letting it all hang out. There's an unspoken rule at the spa not to stare or make eye contact, but it's difficult to avert your eyes when a 70-year-old woman is sitting spread-eagle on the side of a tub. This kind of confidence, usually only seen in older women, is truly inspiring for someone struggling with her appearance.

Take Gisele Bündchen, put her through three hours in the sauna, and she'll have butt-crack sweat too.

As a fat person, body shame is just a part of my life, so there are moments when I forget that it is actually something that every woman experiences. I once saw a woman who used her hands to cover large, dark scars, presumably from a breast augmentation. Another walked around with two towels tied around her waist in an attempt to hide a large birthmark. There were C-section scars, cellulite, patches of random body hair, and stretch marks, these natural parts of women's bodies that society tells us to be ashamed of, on almost every woman in the spa. I have also learned that butt-crack sweat is the great equalizer. Take someone as glamorous as Gisele Bündchen, put her through three hours of sweating, and she'll have butt-crack sweat and matted hair just like the rest of us.

When I rave about my experience at the spa to women who have never been, they almost always check out when I mention the part about getting naked with other women. I get it. It took a long time—and frequent trips—to accept the fact that my fat body was deserving of my respect.

Now, when I see obvious newbies come into the locker room who are visibly uncomfortable, it's a pretty stark reminder of how far I've come. I want to give them a hug, but that would be awkward because we are both naked and complete strangers. The fear and trepidation I see in their eyes as they hide in the corner and beeline for the clothed area after showering is a direct result of how much pressure women are under to have a perfect body.

I am planning a much-needed trip to the spa in the coming days, and it is comforting to know that when I stand in front of those mirrors, my brain won't be flooded with hateful criticisms. I won't have to worry about being too ashamed to sit in the hot tub until I'm completely blissed out. As relaxing as a detoxifying spa or body scrub may be, being at peace with my body feels even better.

This content is created and maintained by a third party, and imported onto this page to help users provide their email addresses. You may be able to find more information about this and similar content at piano.io
Advertisement - Continue Reading Below
More From Beauty
All Hail the Middle Part
Beauty Inside & Out: Tasnim Ahmed
Created for From Marie Claire for Created by Marie Claire for
Dove
Advertisement - Continue Reading Below
Natural Moisturizers to Leave You Glowing
Pore-Cleaning Devices for Playing Dermatologist
Beauty Inside and Out: Antoni Porowski
Hot Rollers for the Curls of Your Dreams
The Foundation Brushes the Pros Are Obsessed With
The Best Temporary Hair Dyes for Commitment-Phobes
Yes, LED Face Masks Work, and Yes—You Need One
Hair Glosses That Promise the Ultimate Finish