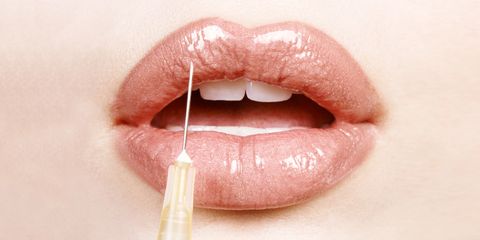 The doctor I went with was recommended by a bunch of friends–and she's done some celebrities too, whose lips all look really natural–so I felt like I trusted her.

It cost $170 for me, but the woman who did them comes down from Newcastle in England and does a lot of people at once, so I think I got a slightly cheaper rate. At other places I've looked into, prices seem to start around $339 so it can obviously be an expensive habit.

The treatment didn't take long at all–after a numbing cream was applied (and left for five to 10 minutes) the actual injections took less than 10 minutes.

I'm not sure how many individual injections the doctor did–but it was basically a 1 ml syringe of Juvéderm, so at a rough guess maybe about eight or 10 individual injections. Although the area was numbed it was still really painful.And it bled quite a lot, which I wasn't expecting.

How they looked two hours after the fillers

Straight after it feels really weird: They're super swollen straight away and feel really solid. You're told to massage any lumps (ew) between your thumb and forefinger, which doesn't hurt because of the numbing cream, but after that's worn off they REALLY hurt for a good 12 hours.

My lips were dry, sore, and cracked—I think due to the huge swelling and I've got pretty dry lips anyway. I felt really self-conscious with the swelling for a good three or four days after having them done.I also got quite bad bruises so I had to wear lipstick for at least a week afterward to cover that up.

Bruising the next day (OUCH)

Personally, I found a lot of the filler sat around the top lip line rather than plumping up the fullness–which, on me, I think looks really obvious. But if you've got fine lines in this area, that could be a good thing.

I now feel like I have to apply lip liner over the "filler line," to make it look more natural–whereas before, I hardly ever lined my lips. Kissing doesn't feel noticeably different–but they do feel way more solid to touch than natural lips, which is really weird.

How they looked when they settled down

I had them done about two months ago and as you can feel the filler in your lips, I know it's still there, which grosses me out slightly. My lips were never super plump but they're definitely still poutier than before. I've got friends though who love theirs and they get 'topped up' with 1/2 ml of filler every six months.

I think if you've got thin lips to start with, you actually need way more filler in them than you initially think. Everybody's lips are totally different, and not everyone gets the same result.

After it's fully gone, I feel like I will probably miss the fullness of my top lip–and I've gotten used to wearing lipstick now, which I didn't before because I thought it drew attention to how thin they were.

But, I also think getting them done made me more self conscious because I didn't tell people I was getting them done and constantly felt like people would notice them and ask. I'd never say never to getting more, but it's not something I'm planning right now.

Chloe's lips before and after

Bridget March Bridget March is Bazaar's Digital Beauty Director overseeing all beauty content for harpersbazaar.co.uk, including fitness and wellbeing.
This content is created and maintained by a third party, and imported onto this page to help users provide their email addresses. You may be able to find more information about this and similar content at piano.io
Advertisement - Continue Reading Below
More From Beauty
FOREO's Game-Changing Brush is on Major Sale
Revlon's Cult-Favorite Brush is on Major Sale
Advertisement - Continue Reading Below
Your New Favorite Retinol Is Made From Caviar
24 Hours With Diipa Büller-Khosla
Give Your Curls the Gift of a Diffuser
Meet Your New Hero Ingredient: Niacinamide
This PMD Device Is on Super Sale on Amazon
Yes, You Should Be Using a Jade Roller
This Affordable Razor Promises Smoother Shaves
An Expert on How to Wear Eye Makeup Behind Glasses