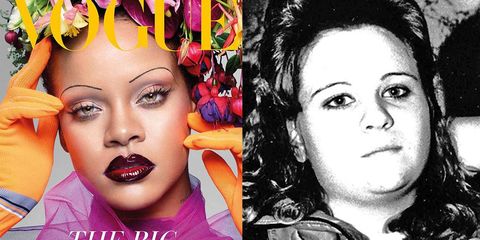 I got my eyebrows threaded for the first time when I was 12 years old. As I walked out of the salon, admiring my new skinny brows, my mother stared at me: “They gave you chola brows!” she gasped, horrified, before immediately making me swear to never thread them that thin again.

Because at the time, in the predominantly Mexican and Mexican-American city of Los Angeles, pencil-thin brows weren’t seen as a fashion statement—they were seen as a gang affiliation, marking you as a chola (a female gang member). Suddenly, I was the 6th grader with a hugely polarizing gang sign on her face, a sign I had been raised to fiercely avoid—and have avoided ever since.

So when I saw Rihanna on the cover of British Vogue this week with a set of ultra-skinny brows, my immediate reaction was, “Wait, WTF?” Why is Rihanna wearing chola brows?

Considering it was highly unlikely that Rihanna had suddenly joined a gang, and seeing as the Caribbean singer wasn’t exactly raised on the streets of East L.A., my Mexican-American heart was deeply confused, and deeply annoyed.

I wasn’t the only person who felt this way. Soon after the photos came out, Latinxs across the internet voiced their frustrations at the double standard.

I understand that skinny brows were not created or exclusively owned by the Latinx community: They also have roots in South African culture, in Roaring Twenties fashion, in the Harlem Renaissance community, and I’m sure they can be found in many other subsections of the world, too.

But to me and thousands of other Mexican and Mexican-American girls looking at these photos, RiRi’s brows look a lot like the chola brows our mothers feared we would one day wear—the brows that are now untouchable and unwearable to women like me, especially in conjunction with hoop earrings and, god forbid, lip liner.

Because I guarantee had, say, J.Lo or Gina Rodriguez graced the cover of a magazine with pencil-thin brows, they would have been ripped apart on the Internet for looking like a girl from the hood at best, or a chola at “worst.” To most Mexican and Mexican-American women, drawn-on eyebrows are a look historically representative of a marginalized culture—my culture—and have become a Latinx street style viewed as “trashy” by the rest of society. That is, until Rihanna wears them.

And I wanna say my girl RiRi didn’t know better, but this is her second time using chola style for fun—the first being her infamous chola Halloween costume in 2013, for which she painted a teardrop on her cheek, wrote “Thug Life” on her knuckles, and wore an outfit of hoop earrings, low-slung khakis, a plaid shirt, and, of course drawn-on eyebrows.

It was brutal to see then, and it’s brutal to see now. And though I know the cultural appropriation of chola style has been going on for years (see: Nicki Minaj and Gwen Stefani), the recent iteration of it has been dressed up in designer clothes, prompting the internet at large to ignore its complicated history and instead ask, “Are skinny brows back?” Fun fact: They never left; you just haven’t been hanging out in the right places.

As a minority, I know I’m always one step away from being judged negatively based on how I look. I know that if I stepped out with these brows tomorrow, I would face such intense judgement that would just feed into the negative stereotype many minorities work very hard to avoid. Not all of us have the luxury of drawing on some eyebrows and calling them fashun—even if RiRi does look gorgeous, and even if it's just an editorial spread meant to look pretty and harmless and inspirational.

I understand that some people may not see Rihanna's photos and immediately think chola. I get that some people will see the brows and think of the ‘20s and Josephine Baker, or even Marlene Dietrich. But for the Latinxs among us who have faced persecution for our appearances for decades—and for the cholas I knew growing up who took immense pride in their look—we will only ever see chola brows, no matter how much you dress them up.

Related Story
The 70 Most Controversial Celeb Outfits Ever
Krystyna Chávez Krystyna was the former Social Media Editor of Marie Claire where she oversaw all things social media and connected with MarieClaire.com readers.
This content is created and maintained by a third party, and imported onto this page to help users provide their email addresses. You may be able to find more information about this and similar content at piano.io
Advertisement - Continue Reading Below
More From Beauty
At-Home Laser Hair Removal Devices That Work
This Magic Hair Straightener Brush Is On Sale
Advertisement - Continue Reading Below
Crest's Cult-Favorite Whitening Strips Are On Sale
Marie Claire Editors Share Their Favorite Mascara
This Techy Rotating Curling Iron is On Sale
The Brow Growth Serums That Really Work
The Best Editor-Approved Lip Scrubs
FOREO's Game-Changing Brush is on Major Sale
Revlon's Cult-Favorite Brush is on Major Sale
Your New Favorite Retinol Is Made From Caviar