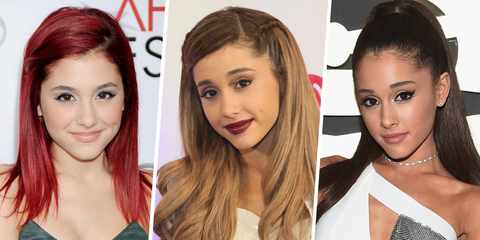 Getty Images
Despite what her powerhouse, four-octave vocal range might suggest, Ariana Grande is only 21-years-old. But since her big break, she's done more experimentation with hair and makeup than most of us will in our lifetimes. Here, we look back on how Grande went from a young, scarlet-haired child star to the ultra-glamorous pop star she is today—one lip shade at a time.
1 of 20
October 30, 2008

She sports her natural ultra-dark brown hair and fluffy coils during an event at Planet Hollywood as part of the cast of 13 on Broadway.

Here, she works her formerly-signature fire engine red hue with a cropped chop and cool cat eyes at the premiere of Fantastic Mr. Fox in L.A..

Her scarlet coif is decidedly longer, with rosy cheeks and fanned-out lashes, at a Make-A-Wish and Starlight Children's Foundation event in L.A.

She wears her hair with one twisted piece in the front, styled in a low ponytail worn on the shoulder at the Shrek Forever After premiere in New York City.

Grande ups the volume with a super-high pony and bat-worthy lashes at the premiere of Justin Bieber's Never Say Never film.

With long mermaid hair, she opts for a bright red lip, sun-kissed cheeks, and a dusty of orange shadow at the premiere of Harry Potter and the Deathly Hallows.

She wears stick-straight bangs and a peachy nude lips to host the Love Culture Holiday Launch Soirée in Santa Monica.

She styled her newly-minted dark hair in a half-up, half-down hairstyle with a pink satin bow, with pink cheeks, and a classic red lip at the T.J. Martell Foundation's 13th Annual Family Day in New York City.

She goes retro with her hair slicked back in a low, knotted ponytail with a matte pink pout at Variety's Power of Youth event in L.A.

Later on in the same day, she attends the 2012 Primetime Creative Arts Emmy Awards with her lips painted tangerine to match her halter gown.

With her hair smoothed back into another ponytail, she sports bright pink lip gloss and a bronze glow at The Twilight Saga: Breaking Dawn Part 2 premiere.

She slicks her long, wavy hair back and wears a bronzed smoky eye and soft pink lips at KIIS FM's Jingle Ball 2012 in Los Angeles.

She styles her go-to half-up, half-down hairstyle with a delicate flower crown headband and romantic pink lips at the 2013 Radio Disney Music Awards.

With her hair dyed a brighter shade of chestnut, she wears her favorite light smoky eye and a frosty lip at 102.7 KIIS FM's Wango Tango.

She gives the half-up, half-down look a retro upgrade by wrapping hair around the base of her ponytail and paints her lips a matte dusty rose at the 2014 Teen Choice Awards.

Grande wears her beloved cat ears in her smoothed-back hair at 1 OAK in Las Vegas.

At the 2014 Nickelodeon's Kids' Choice Awards she wears he hair completely down for the first time in a while with perfectly-painted cat eyes.

She wears her hair ultra-straight, parted down the middle yet again with a berry lip to top off the look at the 2014 MTV EMA's.

Perhaps her most sophisticated look to date, a voluminous ponytail is paired with a prominent cat eye and glossy lips at the 2015 Grammys.

Next
5 *Vitally Important* Tricks for Surviving a Music Festival 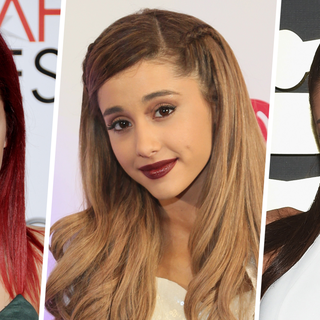 Advertisement - Continue Reading Below
Lauren Valenti Associate Web Editor I’m the associate web editor at Marie Claire.
This content is created and maintained by a third party, and imported onto this page to help users provide their email addresses. You may be able to find more information about this and similar content at piano.io
More From Beauty
The Nail Trends for Spring Are All About Optimism
These Shampoos Will Make Your Hair Grow Super Fast
Advertisement - Continue Reading Below
24 Hours With Hailey Bieber
Acne Spot Treatments That Actually Work
Why The Lashify Control Kit Is Worth It
What to Buy From Sephora's Spring Savings Event
Hot Tools Are No Match for Heat Protectant Sprays
How to Tighten and Firm Your Neck Area
The Blue Shampoos Brunettes Will Love
Snuggling Gives Kristen Bell a Great Sense of Calm