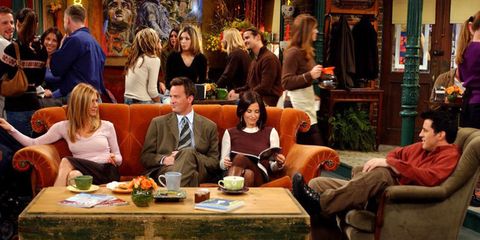 Advertisement - Continue Reading Below
1 Penny from 'The Big Bang Theory'

There are two kinds of coffee drinkers in the world, and both of them are portrayed in this video. #TeamSheldon

2 Everybody from 'Friends'
NBC

If you'll remember, this is the fictional White House exec who once gave coffee the highest compliment it can ever hope to achieve. (Let's just say it was very high praise.)

Say the next line with me: "Has she died or something?"

5 Kathleen and Joe from 'You've Got Mail'

TBH, like 70 percent of this movie takes place in establishments that specialize in hot roasted-berry water.

Coffee. Pie. In the Twin Peaks world, they go together like PB & J.

Chelsea Peng I'm Chelsea Peng, the assistant editor at MarieClaire.com.
Advertisement - Continue Reading Below
More From Beauty
100+ Chic Haircuts to Add to Your Mood Board
Our Guide to Finding Your Perfect Nail Shape
Advertisement - Continue Reading Below
In Her Own Words: Halima Aden
Beauty Editors Share the Best Products for Acne
Easy Homemade Face Masks for Glowing Skin
#BigLipstickEnergy: The Cult Classics Edition
Editors' Picks: Face Rollers That Work
The Chicest Lobs That'll Look So Good on You
What to Buy at Ulta's 21 Days of Beauty Sale
The Best Eye Creams for Getting Rid of Puffy Bags