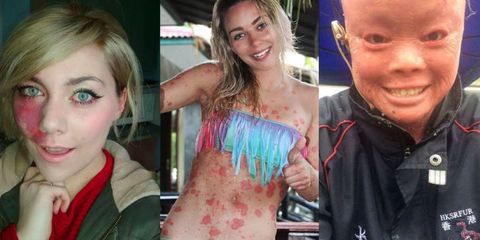 Unless you live under a rock (you know, without internet), it's impossible to ignore the inspiring movement that's been sparked by a handful of women who suffer from rare skin conditions. Instead of hiding their symptoms from the world, these five women are celebrating their natural beauty, spreading awareness, and bringing a whole new meaning to #NoMakeup selfies in the process.

From "undateable" to internet sensation: The 23-year-old British artist posted a few selfies on Imgur, which have already gone viral and received multitudes of comments in praise of her bravery. Harford said she was once scouted for the reality shows Undateables and Too Ugly For Love? but declined because she would rather people with birthmarks accept themselves and "see themselves differently."

"I'm absolutely not self conscious about it at all," she wrote on Imgur. "I actually like it a lot."

After concealing a scar on her torso —the result of undergoing four open-heart surgeries—for years, this Reddit user decided to celebrate it by wearing a two-piece swimsuit to the beach. "I am so proud that I finally felt confident enough to wear a bikini instead of hiding my scar," she wrote.

For over a decade, 24-year-old Lanuzza has suffered from psoriasis, a skin condition that causes red, raised patches to cover 97% of her body. While it was hard to come to terms with at first, she now views it as a blessing in disguise. "After all these years I finally have confidence in my own skin I want to show other women that their 'abnormalities' could be their strengths," she told the Daily Mail.

Revitalizing the supermodel landscape as we know it, 21-year-old Harlow has vitiligo, a disease that causes the loss of skin color on portions of the skin. As a teenager, Harlow was serendipitously spotted by Tyra Banks, who encouraged her to audition for America's Next Top Model. She did—and placed sixth. Since then, she has starred in numerous fashion campaigns, magazine spreads, and Eminem and Sia's music video for "Guts Over Fear."

After 30 years of concealing her face from the world, writer Goodman-Helfand took off her makeup and shared an eye-opening, bare-faced selfie that showcases her symptoms of scleroderma, a rare autoimmune disease that causes a hardening of the skin. When Facebook refused to post the photo due to "negative feedback," the internet fought back, and an awareness campaign, #SclerodermaSelfies, was launched. To learn more about how you can participate in the initiative, visit Goodman-Helfand's blog Comfortable In My Thick Skin.

Thomas, 22, suffers from Harlequin Ichthyosism, a rare genetic condition that leaves her skin raw, thick, scale-like, and prone to infection. Despite the hurdles of her condition, Thomas has dedicated her time to speaking at schools, raising awareness about living with a "visible difference" and discouraging bullying.

For 17 years, 24-year-old Posteraro wore thick makeup on her body to cover up the pale patches on her skin caused by vitiligo. Fed up with feeling like she has to explain her condition to onlookers, she had "It's called vitiligo," tattooed on her arms. "[I decided] to answer the questions in their heads and give them something to actually stare at," she explained.

Lauren Valenti Associate Web Editor I’m the associate web editor at Marie Claire.
This content is created and maintained by a third party, and imported onto this page to help users provide their email addresses. You may be able to find more information about this and similar content at piano.io
Advertisement - Continue Reading Below
More From Beauty
Easy At-Home Brow Tints That Really Work
Facial Sunscreens You'll Love Wearing (Really)
Advertisement - Continue Reading Below
Cool Braids to Steal the Show With This Summer
24 Hours With Instagram's Favorite Makeup Artist
Cream Eyeshadows That Won't Ever Budge or Crease
Vitamins for Your Shiniest, Healthiest Hair Ever
NATIVE Deodorant Is a Clean Beauty Miracle
There's a BB Cream for Every Single Skin Type
Consider This a Sign to Get a Lob This Summer
Foot Peels Are Your Satisfying Secret to Soft Feet