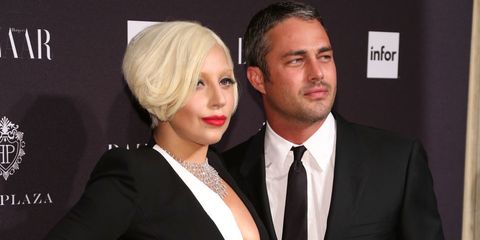 Update, 5/12: It seems Mother Monster is taking on a new name—that of her fiancé, Kinney. While arriving at LAX airport, the singer was asked by paparazzi whether she'll be changing her last name after the wedding. She quickly replied "yes" with a smile and nod, according to E! online.

Her full name will then be Stefani Joanne Angelina Kinney—her maiden name is Germanotta. Gaga's engagement ring also features "T and S" to note their first initials. Writing after the engagement news broke, the singer posted to Instagram: "He always called me by my birth name. Since our very first date. I'm such a happy bride-to-be! I can't stop smiling!!"

We can't stop smiling either, Gaga.

Update, 1/28: Lady Gaga and Taylor Kinney are apparently planning to tie the knot this summer. The couple, who have been dating since 2011, was rumored to have held a secret commitment ceremony in October. And now, according to Life & Style, Gaga is now planning a bigger wedding to be held this summer in Malibu.

The singer is said to have a farmhouse in Malibu Hills where the ceremony will be held in front of family and friends—and possibly with a special performance by Tony Bennett. Neither Gaga nor Taylor Kinney's reps have confirmed or denied these rumors yet, but it sounds like congratulations are in order for the happy couple.

Update, 10/14: According to an insider source via The Daily Mail, Lady Gaga and Taylor Kinney reportedly held a commitment ceremony. After dating for three years, the couple took their relationship to the next level at an intimate ceremony held at Joan Tratorria, the New York restaurant owned by Gaga's parents. Due to both of their hectic work schedules, the small ceremony was just for close family and friends—although it is rumored the two are planning a wedding for next year.

Original Post, 10/2: Lately, it seems that for every celebrity wedding that gets ample fanfare ( la Kimye and Clooney), another high-profile couple manages to slip completely under the radar and tie the knot without our knowledge. Last week, we learned that Mary-Kate Olsen and Olivier Sarkozy maybe got secret-married thanks to a public display of feeding each other on a park bench. And today, rumors are beginning to fly that Lady Gaga and very normal boyfriend Taylor Kinney may have done the very same. And who let the news (maybe) slip? That would be none other than Kinney's Chicago Fire co-star, Sophia Bush.

See that ring on that finger? This is Hollywood, after all, and for all we know, it could be part of Kinney's costume. But, NO! Bush captioned the photo with this:

I'm REALLY excited to be on @nbcchicagofire tonight! Just about as excited as I was to see my buddy #TaylorKinney at our press day yesterday. Bear hugs are the best hugs. #ChicagoFire #ChicagoPD #ThatsHisPersonalRing #NotForTheShow #EveryoneCalmDown #LindsayAndSeverideArentMarried

Related: I Spent 10 Minutes With Lady Gaga (and Her Dog, Asia)

What's more: Lady Gaga was spotted shopping for dramatic white gowns this summer, spawning all sorts of engagement rumors. We kind of shrugged it off, because this is Gaga, the woman who wears meat and cheekbone prosthetics, so her shopping habits are really anyone's guess. But now, we're not so sure.

Related: 10 Outfits Lady Gaga Should Wear When She Performs in Space

The only reason why we're kind of hoping it isn't true is that we would like to see what an over-the-top Gaga wedding looks like. We were picturing Tony Bennett and Elton John serving as co-officiants, her pup Asia bearing the ring, and the bride donning some couture creation that probably doesn't even remotely resemble a wedding dress (or any kind of dress, for that matter). Is that all for naught?

We'll keep our eyes peeled for evidence on Gaga's hands as well.

This content is created and maintained by a third party, and imported onto this page to help users provide their email addresses. You may be able to find more information about this and similar content at piano.io
Advertisement - Continue Reading Below
More From Celebrity
Twitter Is Slamming Kylie Jenner's Water Pressure
Kate Had a Big Regret About Her Engagement to Will
Advertisement - Continue Reading Below
An Attack Dog Once Mistook Will for an Intruder
The Queen Is Still Prince Harry's Mentor
Doug Emhoff Reacts to Kamala Harris's Googling Him
Harry Was Homesick for a While, But Is Happy Now
Chrissy Teigen's Therapist Inspired Her New Hobby
J.Lo Claps Back After Botox Comments
Katie Just Posed in a Shirt Her Boyfriend Designed
Meghan Wasn't Appreciated for Royal Contributions