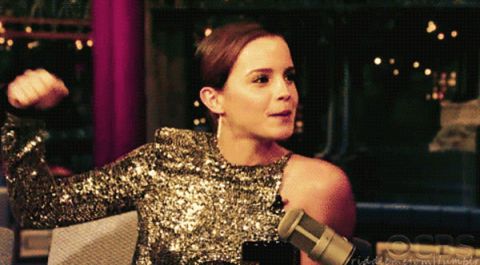 Let us count the reasons why Emma Watson gets top marks as a Goodwill Ambassador for UN Women: she delivers simultaneously moving and self-deprecating speeches about feminism; she doesn't let malicious Internet campaigns rattle her; and she doesn't forget to say thank you.

The actress and skilled orator took to Twitter on Wednesday with some terrific news: the astounding number of people who've tweeted about gender equality movement #HeForShe:

Like a mom whose kid has just scored the winning goal, she then proudly shared this photo and expressed gratitude to all who've participated:

Twitter HQ painted our #HeForShe hashtag on their wall: pic.twitter.com/DtbCwoX6Ms

I can't thank you all enough. #HeForShe

Thank you, Emma, for your work on behalf of all women. Here's to another million.