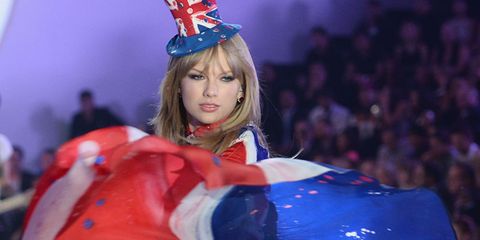 Taylor Swift will headline this year's Victoria's Secret Fashion Show—her second year in a row performing at the lingerie extravaganza, the brand confirmed this morning. As well as by the requisite runway's worth of models, she'll be joined by good friend Ed Sheeran, as well as Ariana Grande and Irish musician Hozier (who will also all perform during the show).

This year's Victoria's Secret Fashion Show takes place in London, which should allow for all sorts of English Breakfast tea bag thong couture and/or sexy Elizabethan ruff-style collars accentuating the requisite push-up bras. Also, given that T-Swift wore the Union Jack-patterned ensemble pictured above during last year's show, she might not even need a whole new wardrobe. You know who else might not need new clothes for the show? T-Swift's Angel nemesis, model Jessica Hart, who caused all sorts of controversy after telling a reporter at last year's show that Taylor, "God bless her heart" and all, just didn't fit in among all the models. (This despite the fact that Taylor and her top model BFF Karlie Kloss are nearly as interchangeable as they are inseparable these days.) Though the model lineup for this year's show is not yet fully confirmed, Harper's Bazaar has pulled together a handy list of Instagram photos from models excited to share their casting news... and Jessica's not on it.

Rumors floated following her comments said that Hart would be "blacklisted" from future shows for her sins. Now, it's worth noting that she has shot for the brand since the whole snarky lil' snafu, and Victoria's Secret executives have been publicly supportive of her and her wings. But while T-Swift is not known for her diva demands, it wouldn't seem out of the realm of possibility that her contract for this year's show came with a "no meaniepants" clause.