Kendall Jenner, who has been reportedly casually dating L.A. Clippers player Blake Griffn for a couple months, just made things "full-on" official with him, according to Us Weekly. 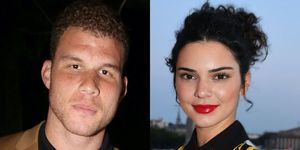 “They’re legit. They’re a full-on couple,” a source close to Jenner told the outlet. “Kendall has been going to a lot of his games and they have been enjoying time at home when Blake is in town. They’re good.”

Jenner was indeed spotted at one of Griffin’s games last week. She was also photographed having dinner with him and his friends.

That said, Jenner isn’t likely to confirm any of this for now... "If I'm not fully, fully in it with someone, why would I make it public to everyone else?" Jenner told Harper's Bazaar earlier this year.

Alyssa Bailey News and Strategy Editor Alyssa Bailey is the news and strategy editor at ELLE.com, where she oversees coverage of celebrities and royals (particularly Meghan Markle and Kate Middleton).
This content is created and maintained by a third party, and imported onto this page to help users provide their email addresses. You may be able to find more information about this and similar content at piano.io
Advertisement - Continue Reading Below
More From Celebrity
Chrissy Teigen Shared a Sweet Video With Luna
EmRata Displayed Her Bump in an Open Button-Down
Advertisement - Continue Reading Below
Harry Sent a Legal Warning Over "False" Article
Chrissy Teigen Talked About Her Baby Loss Photos
Chrissy Teigen Opens Up About Her Loss
A Look Back at Gwen Stefani & Blake Shelton's Love
Serena Williams Shows Off Toned Body In BTS Photos
See a Romantic New Photo from Beatrice's Wedding
Harry Was Treated as a "Spare" by the Royals
Cardi B Called Out Racist Reactions to Her Birkins