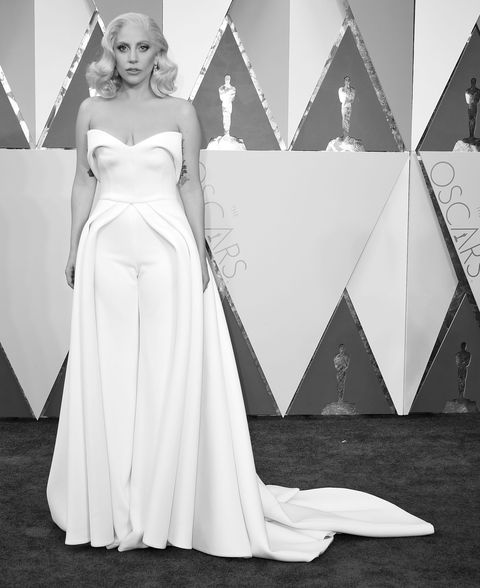 During this year's Oscars, Lady Gaga stole the show with her moving performance of "Til It Happens To You." The song, written for the sexual assault documentary The Hunting Ground, was haunting in itself, but the performance was an emotional double-whammy: Gaga, who has openly discussed her own alleged assault, was surrounded by other survivors with empowering messages written on their arms.

In an interview, Gaga told Elvis Duran and the Morning Show that her own assault, which she said happened 10 years ago, has led her to experience chronic pain ever since. "It stays in your body, in your tissues, physically in you," she said. "I feel physical pain and there's a lot of other people that suffer from chronic pain who have been through a traumatic experience. I actually suffer from chronic pain all the time, and it's from this paralyzing fear that I've experienced for almost 10 years."

Though she said she's still not over her trauma, she did note that her Oscars performance with fellow survivors of sexual assault was a breakthrough for her. "I have people every day look at me like a celebrity, and that day was the first time in 10 years that I was looked at like a human being," she said. The group even got matching tattoos to mark the event. She elaborated on the life-changing performance:

In a separate interview on 97.1 AMP Radio, Gaga told Carson Daly why it's so important to stand with her friend Kesha, who lost a court case against her alleged abuser, Dr. Luke. "I feel like she's being very publicly shamed for something that happens in the music industry all the time, to women and men," she said. "I just want to stand by her side because I can't watch another woman that went through what I've been through suffer, you know?"

Gaga was one of the first celebrities to speak out in her favor, and the two even posted a photo together after the court case ended. She elaborated about their bond to Daly:

"I'm friends with her personally and what I'm watching her go through is not only something I've been through, but something that's really devastating to witness. Somebody that has such a beautiful light within them, so much talent to give. Just to see that light burn out because they feel that no one's listening to them, I feel that it's my responsibility to stand up for her when there's a lot of people that are not listening to her plea for love, for people to have compassion and empathy."

This content is created and maintained by a third party, and imported onto this page to help users provide their email addresses. You may be able to find more information about this and similar content at piano.io
Advertisement - Continue Reading Below
More From Celebrity
Harry Panicked About the Queen's Hospital Stay
Olivia Munn Doesn't Care About "Settling Down"
Advertisement - Continue Reading Below
These 83 Twitter Accounts Harass Meghan Markle
Adele's Ex Came to a Special Taping of Her Album
Kristen Stewart on a "Spooky" Moment Playing Diana
Travis Covered His Ex' Name With Tattoo for Kourt
Kendall Jenner Wore a Bedazzled Pink Cowboy Hat
Kourtney & Travis Will Def "Have a Baby Together"
Britney Is Done With "Rude, Humiliating" Family
Ben & Jen Are Meeting Up "Whenever Possible"