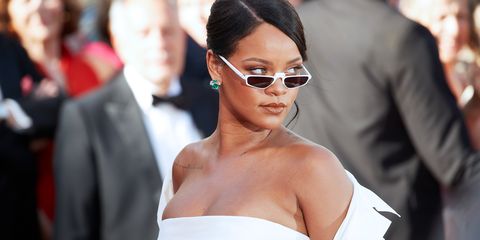 Yesterday, Rihanna responded publicly to an offensive ad on Snapchat that featured her and her ex Chris Brown and made light of domestic violence. Today, Snapchat's stock has plummeted. Like Kylie Jenner before her, Rihanna has proven that one celeb post can be worth millions (or, in some cases, billions).

The singer was responding to Snapchat's distasteful ad, which asked users if they'd rather "slap Rihanna or punch Chris Brown." The ad immediately went viral, and is pretty objectively offensive, considering Brown was found guilty of assaulting Rihanna during their relationship.

According to The Guardian, Rihanna's honest and brutal response to the repulsive ad has caused Snapchat's shares to drop almost $1 billion in total value. And Reuters reported that the company's shares dropped by almost 5% since the Rihanna's post, signalling just how important a celebrity's endorsement, or criticism, of a brand can be.

Snapchat previously apologized for the error, telling the BBC, "We immediately removed the ad last weekend, once we became aware. We are sorry that this happened."

This is, of course, the second recent time a celebrity's opinion of Snapchat has drastically driven down its stock price: in late February, Kylie Jenner's mere mention on Twitter of not using the app anymore caused its stock to lose 1.5 billion in value.

But this time, it's more serious. Rihanna's extremely personal and emotive Instagram Story proved just how inappropriate the ad was, and how insensitive its subject matter was to anyone affected by domestic violence. As Rihanna wrote:

"You spent money to animate something that would intentionally bring shame to DV victims and made a joke of it!!! This isn’t about my personal feelings, cause I don't have much of them…but all the women, children, and men that have been victims of DV in the past and especially the ones who haven't made it out yet…you let us know! Shame on you."