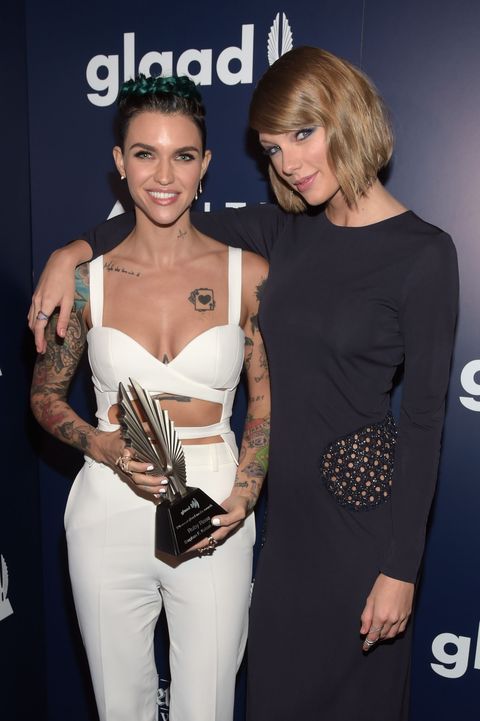 You never know where Taylor Swift is gong to pop up these days. Somewhere between her hilarious Apple Music commercial and showing off her best street style, TSwift found the time to make a surprise appearance at the 27th annual GLAAD Awards in Los Angeles.

This was the first time she's attended the ceremony and there was a very special reason: the singer presented Orange Is the New Black star Ruby Rose with the Stephen F. Kolzak Award.

Taylor Swift took the whole crowd by surprise as she walked on stage, including pal Ruby Rose who later posted this touching Instagram saying she was "brought to tears" by Swift's appearance.

The two looked like the perfect pair in black and white ensembles and gave each other a warm embrace on stage.

Tonight was EVERYTHING... Thank you @taylorswift thank you @glaad thank you to everyone who came out to be part of an amazing night. I feel truly blessed and humbled. I'm going to go cry and hold my pillow like a teddy now because I feel like I'm dreaming.

The Stephen F. Kozak Award is a special honor presented to an LGBT person in the media who has made a significant difference in promoting equality and acceptance. Sounds like Rose who felt "truly blessed and humbled" to win was the perfect fit.